112 Ocean Avenue is perhaps one of the more famous examples of a recurring yet notoriously hard to classify a breed of villain known as the "Possessed Object" - in this case a house which most come to know as both the "Amyville House" and also "High Hopes": although it can be argued that the true antagonists of the Amityville Horror where poltergeists or demons there is also a school of taught (especially in the movie series based on the events) that the house itself was somehow alive, making it a villain in its own right.

112 Ocean Avenue is a real location in Amityville though the locals dislike the attention the Amityville Horror brings to their neighborhood and as such have renamed the house as well as redesigned it: in the movies 112 Ocean Avenue is infamous for its demonic windows that resemble glowing eyes - the style of architect this building was originally is described as Dutch Colonial.

In the movies, 112 Ocean Avenue was said to be isolated but in reality it was within 50ft of other houses and the story of the Amityville Horror is deeply controversial even to this day: with some claiming that it was a demonic phenomena and others claiming it was a hoax.

Regardless of what truly happened at 112 Ocean Avenue, one thing is known for certain, this home was the location of a grisly mass-murder by Ronald "Ronny" DeFeo Jr. in 1974 - this massacre is widely claimed to have given the location its curse (though in the films it is suggested that DeFeo was possessed by the house into committing these acts).

Supernatural events that are attributed to 112 Ocean Avenue includes swarms of flies, an invisible "imaginary friend" that turns out to be some kind of demonic pig, spouts of madness and violence in people that stay too long, poltergeist activities such as rattling of windows and slamming of doors: a priest who came to bless the house reported hearing a dark voice (possibly of the house itself) yell "GET OUT!" and many people felt ill by going near the building.

Unpleasant sights and smells would appear on and off in varied parts of the home and the basement was said to have a mysterious "red room" that was not part of the home's blueprint - perhaps a manifestation of the house's true-nature.

Most disturbing of all was claims that green slime would pour out of the walls (changed to blood in the movies) and a crucifix hung on a wall was found turned upside down - making it a Satanic symbol.

112 Ocean Avenue has been heavily altered over the years and bears little resemblence to the haunting building seen in the movies or book yet the original house will always stand as a symbol of one of the most unusual and disturbing ghost stories of American lore (at least in modern times).

It is also worth noting that in the film series (prior to the remake) 112 Ocean Avenue was eventually destroyed but the evil of the house remained active long after this event and went on to possess varied objects and people - including a dollhouse that heavily resembled the original.

112 Ocean Avenue had a variety of supernatural powers, many of which were of a decidedly Satanic origin, the house could emit masses of ectoplasm, black slime and blood - it could summon clouds of flies, induce sickness and madness in others and manifest numerous demonic spirits by which to torment and possess its inhabitants.

the house could communicate with others via intimidating voices or poltergeist activities such as doors opening and closing by themselves, it could also manifest many other attributes and was described at least once as a "passage to Hell", hinting at near-unlimited power.

Strikingly the house was able to resist attempts to bless or exorcise itself, to the point of killing those who tried - this ranks it very high on the scale of demonic entities as most Satanic spirits are extremely weak to holy rites or exorcism.

In addition, a common device used in the film (and advertising) was symbolic glowing lights on the house's two upper windows, giving an illusion of a demonic face - with the windows acting as "eyes". 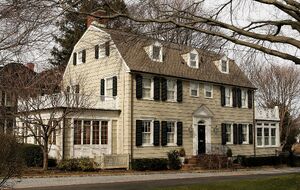 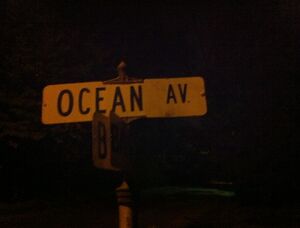 Ocean Avenue
Add a photo to this gallery

Retrieved from "https://evil.fandom.com/wiki/112_Ocean_Avenue?oldid=97621"
Community content is available under CC-BY-SA unless otherwise noted.