Walter Sullivan learned about this ritual in his adolescent years at the Wish House Orphanage. When Walter was a child, he began to believe that Room 302 was his "mother", and was told by Dahlia Gillespie that he could "wake" his mother by completing the 21 Sacraments. As an adult, Walter Sullivan chose his victims because of revenge, kindness (Eileen Galvin) or because they were inhabitants of Room 302 (Joseph Schreiber and Henry Townshend).

In one ending of Silent Hill 4, Henry Townshend is able to stop the ritual from happening by defeating Walter Sullivan, saving himself and Eileen. Another ending shows the ritual of the 21 Sacraments being successfully completed.

Descent of the Holy Mother - The 21 Sacraments

The book called "Descent of the Holy Mother - The 21 Sacraments" is a memo item found in Silent Hill 4: The Room, is a tome that outlines the 21 Sacraments that Walter Sullivan performs through the ritualistic killings he commits throughout the game. It also states for the first time the roles of 2 innocent strangers Henry Townshend (the Receiver of Wisdom) and Eileen Galvin (the Mother Reborn). It is located in the Forest world the second time Henry Townshend visits it. It is obtained in a secret room beneath the burned down Wish House Orphanage, after completing the Burned Doll Puzzle by finding the five missing body pieces scattered throughout the surrounding area, and placing them in their respective places on the doll's body.

"Descent of the Holy Mother - The 21 Sacraments

The First Sign - And God said, At the time of fullness, cleanse the world with my rage. Gather forth the White Oil, the Black Cup and the Blood of the Ten Sinners. Prepare for the Ritual of the Holy Assumption.

The Second Sign - And God said, Offer the Blood of the Ten Sinners and the White Oil.

Be then released from the bonds of the flesh, and gain the Power of Heaven. - From the Darkness and Void, bring forth Gloom, and gird thyself with Despair for the Giver of Wisdom.

The Third Sign - And God said, Return to the Source through Sin's Temptation. Under the Watchful eye of the demon, wander alone in the formless Chaos. Only then will the Four Atonements be in alignment.

Ritual of the Holy Assumption

Through this seemingly important ceremony known as the "Ritual of the Holy Assumption", Walter Sullivan was able to become the 11th Sacrament by crucifying himself in Room 302's storage room and continue to live as a ghost in his own "Otherworld". The exact workings of the ritual are unknown. However, when Henry Townshend discovers Walter's corpse in Room 302, he also finds some of the Order cult's sacred objects, such as the Obsidian Goblet and the White Chrism, giving the possibility that they may be required for the ritual. To prepare for the ritual, ten hearts, or ten sacrifices, are also required; these are also found inside the storage room's refrigerator.

The first 10 sacrifices of the ritual were the "Ten Hearts" murders. Walter murdered ten people, carved numbers into their skin, and removed their hearts, apparently for some aspect of the ritual.

The 11th was the "Assumption" sacrifice, which, according to the Ritual of the Holy Assumption, ordained that Walter kill himself, allowing his spirit to live on as a ghost and complete the last ten murders.

The final ten consisted of themes that applied to the specific person murdered, such as "Temptation" for Cynthia Velasquez and "Chaos" for Richard Braintree. 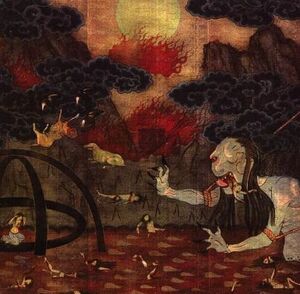 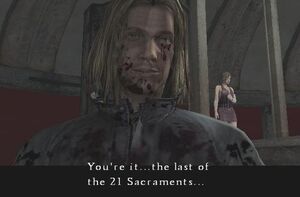 The numbers 11/21 carved on the feet of Walter's corpse.
Add a photo to this gallery

Retrieved from "https://evil.fandom.com/wiki/21_Sacraments?oldid=56353"
Community content is available under CC-BY-SA unless otherwise noted.