Jamhuri within Kenya in Africa

To keep Abdullah safe from intruders.

Abdullah's Camp is a camp located near Thompson's Falls in Jamhuri, Kenya in Disney's 1989 live-action movie Cheetah. It is the home of the ruthless poacher named Abdullah.

After Abdullah, Patel and Nigel capture Duma, they drive to his camp to train Duma for her race against the greyhounds, but not before Ted notices his shoe marks that resemble the tracks at the time of Duma's discovery and realizes Patel's scheme.

After Patel's cousin reveals the location of the camp to Ted and Susan, they set out in the uncharted wilderness to find Duma. At the camp, the poachers decide to train Duma for the race. Their first task involves her endurance, but she didn't run far and Nigel calls her a lazy pussycat.

The next day, when Morogo decides to help Ted and Susan, Abdullah teases Duma with a bowl of meat and they use a wire to make her chase the rabbit, but she once again fails and is forced to go back into her cage. The next morning, the children arrive at the camp and notice the poachers. Ted tries to come up with a plan to confront them, but Susan and Morogo insist on sneaking in at nightfall.

The following night, Ted and Susan break into Abdullah's bedroom as Morogo keeps a lookout for the poachers. After Ted notices Patel's fliers advertising Duma's race, they find Duma in a barn and locked in a cage. They try to find something to break the lock and are jumped by Abdullah. Patel and Nigel arrive in the scene and argue over what to do with them. Abdullah wants to kill them, but Nigel suggests on locking them until after the race. Morogo looks for them in the tool shed and is almost caught by the poachers, but manages to hide as they leave for the race. Morogo then manages to free Ted and Susan and they head off after the poachers to Nairobi Downs.

It is possible that it was either taken down or sold by the police after Abdullah was arrested. 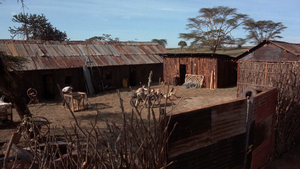 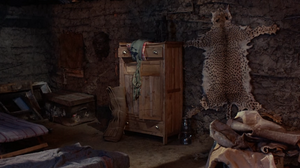 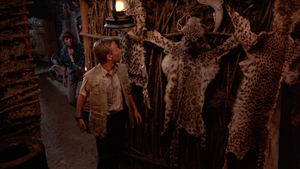 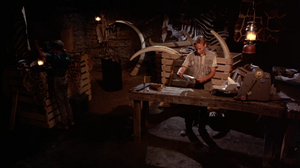 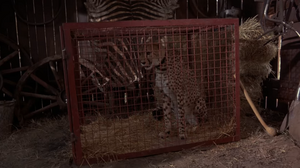 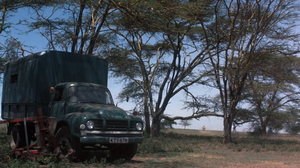 Abdullah's yard.
Add a photo to this gallery

Cheetah- The gamblers train Duma
Add a photo to this gallery

Retrieved from "https://evil.fandom.com/wiki/Abdullah%27s_Camp?oldid=95799"
Community content is available under CC-BY-SA unless otherwise noted.