To amplify and harness Abigail Williams' magic as she do evil upon other people.

To amplify the magic of Maxim Horvath's Staff.

Abigail Williams' Necklace, also known as Abigail Williams' Pendant, is an ensorcelled pendant necklace that belonged to the legendary wicked witch Abigail Williams, who receives her preternatural power from it. And it is one of many magical items in the 2010 Disney fantasy adventure movie The Sorcerer's Apprentice. Most sorcerers receive their power from rings.

When the wizard Maxim Horvath uses the Parasite Spell on her, he takes her necklace and places it on his staff.

This pentagram-like pendant is worn by Abigail Willaims, the dangerous 17th century witch whose legend was responsible for putting the town of Salem, Massachusetts on the map.

During the 1600s, she used her own magical to cause hysteria and chaos in the town of Salam before being imprisoned in the Grimhold by the noble wizard Balthazar Blake for her crimes.

Later in New York on the following night, Horvath uses the Parasite Spell on her, he takes her necklace and placed on his staff while leaving her for dead.

Abigail Williams's Necklace is made of black silver, and is shaped like an upside-down star with a circle around it, an reversed pentagram which is a common occult symbol in black magic. The necklace resembles a star-shaped sigil that is the symbol of the Morganians, when without the circle. It has a long red thread that holds it.

The Necklace's powers are same with magic rings which are catalysts (items with magical properties). It is what fuels or harness Abigail Williams' dark powers and also it also emits a glowing, dark orange aura around it when its supernatural energy is being charged or when Abigail uses her Necklace to conjure her accursed magic.

Abigail Williams' Pendant is featured in the 2010 Nintendo DS videogame adaptation of Disney's The Sorcerer's Apprentice with Abigail herself as the game's fourth boss. 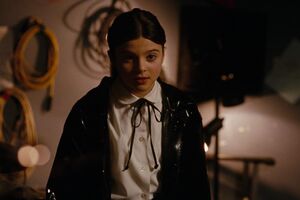 Abigail Williams, also called "Aby", in her modern-day disguise.
Add a photo to this gallery

Retrieved from "https://evil.fandom.com/wiki/Abigail_Williams%27_Necklace?oldid=113555"
Community content is available under CC-BY-SA unless otherwise noted.