The Evil Wiki
Register
Don't have an account?
Sign In
Advertisement
in: Evil Lairs, Prisons, Oppression,
and 6 more

Outside, academy is a building with courtyard and fountain hide boiler room entrance. Inside, the academy conditions is completely worse because of messy, rotten walls, holes in soil, rust and acid in water pipes from boiler room.

Cortex was student this place when had 4 years and here which he created the Evolvo-Ray prototype using his pets Victor and Moritz as test subject when 8 years. That same age, this academy was destroyed by freak explosion together with most of the surrounding town and unknowingly the academy grounds became a island.

During the events of Crash Twinsanity, this academy is visited for Neo Cortex and Crash Bandicoot in airship for seek Nina Cortex; but the pair have had to kill pests, battle with Dingodile, face with aggressive academy drones and escaping of Evil Twins' grunts.

The end of academy, Cortex meets with his old oppressor Madame Amberly where have superiority battle and Cortex win. Back from airship, the trio leave academy until never anymore. 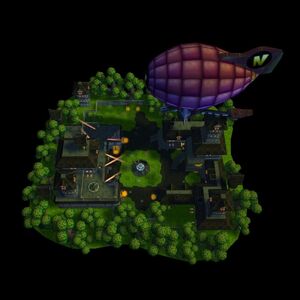 The Academy of Evil
Community content is available under CC-BY-SA unless otherwise noted.
Advertisement