The Akkaba Metropolis is a vast namesake city and base of operations of the Clan Akkaba, a religious secret society devoted to the will of the powerful mutant Apocalypse.

This place was a large underground city located underneath the North Pole. It was established at an unknown point in the past by Clan Akkaba, a secret society and family all of whom were decided from En Sabah Nur - the being known as Apocalypse. This underground city of Mutants contained large towers, organic-look structures and small rivers where boats were used by the denizens to travel from one site to another. It served as the headquarters for the Clan with large numbers of their followers residing within the Metropolis along with guards and administered by Ozymandias. Dark Beast believed that the Clan were far too splintered in the main Earth reality and thus incapable of bringing about an Age of Apocalypse.

After the Death Seed took over his mind, Archangel underwent the Ascension into the heir of Apocalypse after his former master was killed. Thus, he intended to bring about the dominance of natural evolution of the Mutant race and fulfill the ancient cosmic directive of the Celestials. This led to him abandoning his friends in the covert-ops team X-Force and assembling his new followers to bring about his plans. As a result, Dark Beast willingly served Archangel and the pair journeyed to the North Pole in order to travel into the Akkaba Metropolis where Clan Akkaba along with the Final Horsemen bowed before their new master. After battling X-Force, Psylocke intentionally got herself captured in order to be in Worthington's captive as she intended to save the man she loved from the dark programming of the Death Seed. Archangel had her brought to the underground enclave where he had Pestilence watch over her whilst he began his plans for bringing about the renewed presence of the Mutant race. Famine would later reveal the location of the Akkaba city to Deathlokk who informed X-Force of its location.

The group would arrive at the settlement when Archangel along with Dark Beast intended to recreate the world with the Life Seed by igniting the atmosphere through the Doom Fountain. This device which would be powered by Genocide would have eradicated all life and led to the Celestial Seed creating new life from which Clan Akkaba would rule the new world. This plan was disrupted by the arrival of X-Force who were aided by the X-Men from the Age of Apocalypse reality. They eventually destroyed the Doom Fountain and stopped Archangel's plans from coming to fruitrition that left the Metropolis ruined.

A view of Akkaba Metropolis. 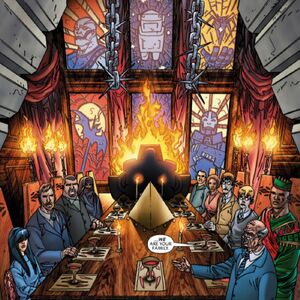 The Clan Akkaba
Add a photo to this gallery
Retrieved from "https://evil.fandom.com/wiki/Akkaba_Metropolis?oldid=88926"
Community content is available under CC-BY-SA unless otherwise noted.