My Little Pony: Friendship is Magic

Cursed alicorn-shaped amulet with an embedded ruby gem on it

Before My Little Pony: Friendship is Magic

To help Trixie defeat Twilight and rule all of Ponyville.

The Alicorn Amulet is a mysterious artifact that blesses the bearer with "untold powers", and it is featured in the My Little Pony: Friendship is Magic episode "Magic Duel". It is an amulet worn around the neck that bears the effigy of a red-and-gray winged unicorn (often referred to as an alicorn), along with a massive blood-red gem that holds its power.

When worn, the Alicorn Amulet appears to grant the wearer immense power, or perhaps dramatically amplify the wearer's own. Worn by a unicorn, it grants immense magical powers (on par with the greatest unicorn spellcasters), including the advanced "Age Spell", which increases or decreases the target's age. While at first glance those powers could be mistaken for nigh-omnipotence, there are some feats of magic even the Alicorn Amulet cannot perform (such as duplicating a target, let ponies play ten instruments at once, or change a pony's gender). Presumably, such spells do not exist (as Trixie points out that nopony can do those spells).

It is unknown what powers the Amulet would grant to an Earth Pony or a Pegasus. It can be speculated an Earth Pony may receive enhanced strength, and a Pegasus enhanced flight speed and advanced meteorological manipulation.

When using the Amulet, the wearer's eyes glow blood-red, and their magic gains the same red glow. The Amulet itself also glows red when its powers are channeled.

However, the power of the Amulet comes at a price: The magic that powers the amulet has a corruptive parasitic death-grip on the user’s soul. The more the bearer uses (or perhaps even simply wears) the amulet, the stronger and more corruptive it’s grip becomes. The Amulet seems to gradually completely smother all the goodness in the user's heart, while dramatically amplifying the evil. If the wearer takes the Amulet off, they can recover from this corruption, but not immediately (as shown when Trixie remained her corrupted self for a while, despite no longer wearing the Amulet).

Furthermore, it has a "magical lock" making it so that only the bearer can take it off. Considering that it offers incredible power and amplifies hunger for power, persuading a wearer to take it off is an incredible feat of its own.

The Alicorn Amulet only appears in this episode. The dark artifact corrupts the resentful and vengeful Trixie into a crazy sociopathic megalomaniac. Empowered by the Amulet, Trixie manages to defeat Twilight Sparkle in a magical duel and enslave the inhabitants of Ponyville. As time goes on, Trixie becomes more and more hateful and even insane under the influence of the Amulet. However, Twilight comes back later and manages to trick Trixie (ironically with stage magic, Trixie's own domain) into thinking that she has acquired an even more powerful artifact. Trixie promptly snatches the phony amulet and discards the Alicorn Amulet, which is snatched by Rainbow Dash and given to Zecora the zebra for safekeeping.

After recovering from the corruption, Trixie seems to be genuinely sorry for her actions under the amulet's influence and displays gratitude for having been freed of its grasp. 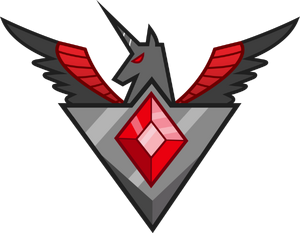 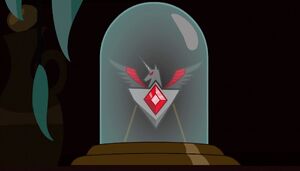 The Alicorn Amulet kept under a glass dome in a curio shop.
Add a photo to this gallery

Retrieved from "https://evil.fandom.com/wiki/Alicorn_Amulet?oldid=110878"
Community content is available under CC-BY-SA unless otherwise noted.