The Evil Wiki
Register
Don't have an account?
Sign In
Advertisement
in: Villainous Events, Conflicts, Technology,
and 4 more

Alien Invasion has also been deemed as one of humanity's greatest threats of survival by some fringe scientists, though most mainstream scientists still put the idea squarely in the realms of science-fiction.

UFOS (Unidentified Flying Objects) is a most common method of Alien Invasion is the appearance of massive space-ships, often equipped with devastating weaponry that can destroy entire cities - these UFOs often target major world cities and attempt to either blitz the human race into submission or simply wipe them out.

Often UFOs have a weakness that is exploited at some point by protagonists, such as the infamous computer-virus that ultimately saved the human race in the original Independence Day, prior to finding a vulnerability, most UFO invasions seem to be invincible and current-day military might is hopeless against the aliens' immense fire-power and shielding(either in form of extremely durable hulls, artillery-proof force field, or both).

Tripods/War-Machines is another famous method of Alien Invasion made popular by the classic novel War of the Worlds, involving aliens sending gigantic war-machines (usually in form of bipedal or other multi-legged mechas) to conquer or devastate the world : These machines are often "walker" type drones that are equipped with death-rays or abduction-beams designed to ruthlessly hunt down, capture or exterminate humans: They are smaller than UFOs and usually land-based. However, war machines are more dangerous than the standard alien invader technology and much like UFOs, it requires luck or knowledge of a weakness to finally topple these machines, which are often invulnerable to any form of resistance up until such a point (in War of the Worlds, the machines were only stopped when the Martians died of the common cold, due entirely to "luck" on the part of humanity).

In some science-fiction medias, war machines' role in a battle when fought alongside other form of alien technology like UFOs tend to equivalent with tanks or superweapons depend on how good the machines' armaments and defenses.

Mass Invasion is another form of Alien Invasion involving technological warfare such as UFOs or war-machines and deployments of mass of foot soldiers. During alien invasion, aliens would also deployed a squadron or more of well-trained members of their kind as either shock troopers or foot soldiers. Like human infantries in real-life and fictions, alien foot soldiers whom taking roles in mass invasion would equipped themselves with an array of hi-tech arsenals such as hand-held death ray guns, portable force-field generators, etc. It is however, not always the case as other invasive aliens such as the Xenomorphs from the Alien franchise or the Bug from Starship Troopers film may rely on brute strength and natural capabilities more than technology. But in either case, one alien infantry always presented as challenging adversary even while alone.

Aside invasion warfare like combat UFOs or war machines, alien foot soldiers may also accompanied by a squadron of mechanical drones with various purpose such as combat, espionage, etc., anything so their invasion can go smoothly.

Parasitic Invasion is a form of Alien Invasion that popularized by Pod People from Invasion of Body Snatchers. In some fictions, aliens are portrayed as parasitic species that need hosts to survive and better interacting with their environment.

While some victims whom become host of a parasitic alien invaders may show obvious symptoms (ranging from deformation of certain body parts to the alien itself latch on the host's body, other victims instead merely shown having minor or psychological symptoms instead such as behave strangely or violent, which obvious warning that the alien has possessed them.

For parasitoid-type aliens however, it was another story: These aliens may used hosts for breeding their kin and when their children inside the host mature enough, they would likely exited from the host's body, from just simply left their hosts weakened or died due to them tearing the host from the inside.

Like dealing UFOs or war machines, it requires luck or knowledge about parasitic aliens to deal this kind of invasion. Those whom counteract this invasion had to be steady, as while some hosts may can be saved by removing that parasite, others may had to be put out of their misery.

False Alliance is another and perhaps far more dangerous method of Alien Invasion involving extraterrestrial "visitors" making partnerships with Earth's humans for their own hidden and ulterior motives. This can be done so via teaching advanced knowledge(s) such as how to recycle waste products into food through matter-energy conversion or giving superior technolog(ies) such as universal communication translaters that can interpet the native dialect of a different species/people into their endemic tongue/speak, any of those thought by some of Earth's human citizenry to avoid all misunderstandings, but all that would become a ruse to something no Earthling has suspected or saw coming until it is too late. The aliens have arrived and they actually are benevolent (most of the time, or at least toward humanity), usually done with the phrase "We come in peace", and humanity is all the better for their having been invaded.

This literal kind of contact between aliens and human Earthlings will go one of two ways, usually.

This 2-way method shows or can show that Earth's mankind is either an aggressive oppressor or a clueless victim, and never in the beneficial combination when it comes to alien invaders. 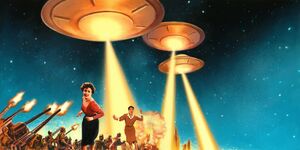 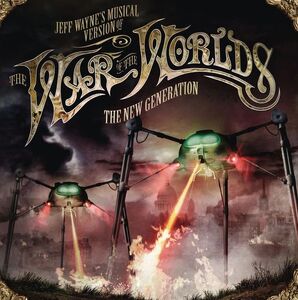 War of the Worlds - one of history's most well-known and popular tales of alien invasion.