The Evil Wiki
Register
Don't have an account?
Sign In
Advertisement
in: Villainous Tools and Other Items, Magic, Paranormal,
and 2 more

The Angels are an absolute shield that protects their masters, the Spirits. Each of their forms, the shape and function all reflect upon the Spirits themselves. Angels can take many forms, from monsters to swords, all of which seem to display some special power.

Zafkiel is the angel of Kurumi Tokisaki, which takes the form of a massive clock face with an old fashioned rifle and a handgun of intricate designs taking the place of the minute and hour hands of the clock, and which allows her to control time. She is able to summon her past selves to fight or take her place as they are essentially Kurumi herself. This not only allows her to cheat death by summoning herself from before her death, but also makes it more difficult for Shido to reach her; such as when Shido was able to persuade Kurumi on top of the school but was interrupted when another self original killed her clone for showing weakness, circumventing any emotional persuasions the same way as physical injuries.

Sandalphon is the angel of Tohka Yatogami, which takes the form of a a broadsword, usually with a throne that doubles as the scabbard, although at times it seems as though she can do just as much damage with or without it, using her hands to project dark energy spheres or bolts in order to slice through inanimate objects with ease.

Gabriel is the angel of Miku Izayoi takes form of an organ that can be used to hypnotize people as seen in the last chapter of volume 6 in which she controlled the Yamai sisters, Yoshino, and the audience. It has been implied that she can not usually hypnotize spirits as when she tried to hypnotize Shido and failed she thought that he could be a spirit like her. She managed to control the Spirits Shido had already sealed without any difficulties, Miku can also fight using her voice as shown when she attacked Shido with a sonic wave, she used her powers to create a shield to protect Shido from Tohka.

Raphael is the angel of the both of the Yamai Sisters, despite using different weapons; have the power to manipulate the air current enough to create a small typhoon. They also have shown to be able to combine their powers to form a bow and arrow that is able to pierce through almost anything.

Haniel is the angel of Natsumi besides being able to fly and transform objects or subjects, also has the unique ability of sending things into a different dimension through a mirror similar to Kurumi's shadow dimension. While in Natsumi’s personal dimension, the objects or subjects are put into a stasis field.

Metatron is the angel of Origami Tobiichi, is a set of golden, feather like, pillars that surround her and, when put together, resembles a large crown. The pillars can shoot out lasers of shining light from their tips, each of which have proven strong enough to pierce Tohka's Astral Dress when she does not create a barrier around herself. Tohka has also claimed that even if she does create a barrier around herself the lasers would still be able to pierce through.

Camael is the angel of Kotori Itsuka comes in the form of a large red halberd, but can be dismantled into Megiddo, a cannon powered by Kotori's own flames. Megiddo fires powerful energy beams that can overwhelm even the defenses of other Spirits. Kotori also has a powerful regeneration ability, which Shido uses/borrows on many occasions when he is trying to make spirits fall for him. Basically, it is an ability that protects the user from certain death as long as the user has enough "mana." It also reverses all physical damage done on the person as if it never happened but only covers the recipient's body.

Zadkiel is the angel of Yoshino, it is a huge puppet that resembles Yoshinon. Zadkiel has two forms, the first form resembles Yoshinon but is a lot bigger, with one red round eye and an eyepatch, large sharp teeth, and white skin. In this form, Zadkiel has the ability to absorb water from the ground and air and release it in the form of an attack. Yoshinon is also able to talk through the puppet, and acts as a limiter to suppress the Angel's powers so that it doesn't end up killing anyone. Zadkiel's second form appears to be its true form, this form also resembles Yoshinon but is even larger than when Yoshinon becomes Zadkiel. The second form is larger than a many-story building, and does not have an eyepatch. This Zadkiel has the same powers as the other but is a lot more powerful. Even Yoshino has problems controlling the Angel.

Nia Honjou's Angel, Rasiel, is a book that can give information about anything that has ever happened in the world, no matter where and when. The user of Rasiel becomes near omniscient. However, in order to use this ability she has to think about the subject she is looking into and her angel does not automatically detect any danger coming to the user either. Everything written in Rasiel is fact; therefore, everything that Nia writes in the book will become reality. 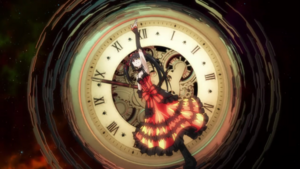 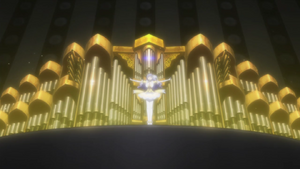