The Evil Wiki
Register
Don't have an account?
Sign In
Advertisement
in: Articles under construction, Evil Realms, Evil Arenas,
and 7 more

Apokolips is both the hellish home planet and dark domain of the mighty alien despot Darkseid. It is one of many locations in the DC universe.

Apokolips is an ecumenopolis with burning firepits, extant in between dimensions, occupying a 'frequency' somewhere between the physical universe and Hell; the war that destroyed the Old Gods and created New Genesis and Apokolips separated the Fourth World from the rest of the universe proper, leaving it accessible by Boom Tube.

The population is a downtrodden lot, including many kidnapped from other worlds before being 'broken.' The majority of the population are called "Lowlies", a bald and fearful race that has no sense of self worth or value. The Lowlies are subject to constant abuse that ends only with death. Slightly above them are the Parademons, who serve as the keepers of order on the planet. Higher above the Parademons are the Female Furies, who are Darkseid's personal guard. (Male Furies also exist, but are less common.) They are blessed with unnatural strength and longevity and are allowed to develop as individuals. This exposure to new concepts often results in them developing comical or garish personalities that contrast strongly with the immense sadism that is required to reach their position. The leaders of the Furies are Granny Goodness, who sports the appearance of a matronly old woman while being the most powerful of the guards, and Kanto, who enjoys a unique position as Darkseid's master assassin. The chief guard, Big Barda, had a third position under Granny, which has not been filled since her defection from the group.

Surprisingly, Apokolips is second to New Genesis in technological advancement. With their technology, they are the height of power in most of the universe and are able to devastate galaxies when they choose to use it. Apokoliptian technology is furthermore the source of unparalleled misery in the universe as the planet routinely arms evil groups with advanced technology in order to further its influence (and misery) across the universe.

Apokolips is ruled by Darkseid as its theocratic god/despot, but he defers most of the actual day to day ruling to his counselor Desaad. Darkseid has no real contenders for the throne of Apokolips except the demon Mantis, although his sons Orion, Grayven, and Kalibak are also potential contenders. Darkseid is cursed by Grayven and Kalibak's stupidity and Orion's service of good. It is prophesied that Orion will overthrow Darkseid.

If Darkseid is overthrown, perhaps the results will not cause any major changes on Apokolips, as Apokolips' evil comes from itself rather than its master. This assertion, however, is debatable, and it is often said that Darkseid powers Apokolips with his ambient forces, which is where the fire pits come from. 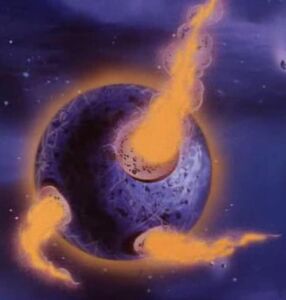 Apokolips as seen in Super Friends. 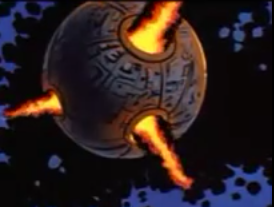 Apokolips as seen in Superman: The Animated Series. 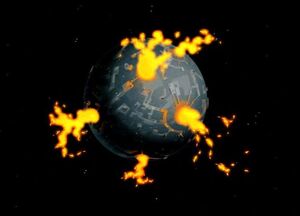 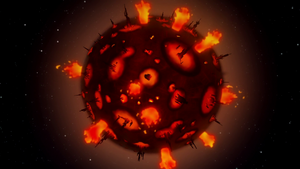 Apokolips as seen in Superman/Batman: Apocalypse. 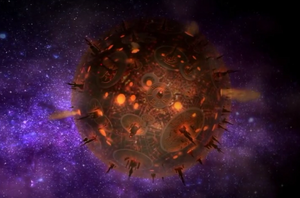 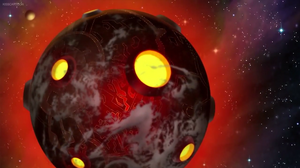 Apokolips as seen in Justice League: Gods and Monsters. 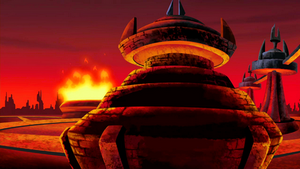 Darkseid's palace as seen in the animated series.