The Aquarium Park is an aquarium-like oriental-themed park that is one of the fantastic attraction areas of Dr. Eggman's Incredible Interstellar Amusement Park and the fifth stage in Sonic Colors. It is an oriental-themed level (similar to Chun-nan/Dragon Road in Sonic Unleashed) set near and under water. When Sonic falls into the water, instead of losing a life, he switches to side-scrolling view and can move around in the water.

An interesting feature here is that Yellow Drill can be used underwater (although the music is different, and is instead referred to by Tails as the "Torpedo form"). Crabmeats and samurai-themed Egg Pawns make their appearance here, as well as a Giant Crabmeat resembling the Interceptors from Sonic Unleashed that chases Sonic through a tunnel. No new Wisps are learned here, but Yellow Drill is used extensively here in the form of a torpedo. It also had a sushi bar, aptly named the Bucket O'Sushi, although Tails implies when rendezvousing with Sonic that the seafood prepared there was terrible (going as far as to say "His cruelty knows no bounds"). There is a boss encountered in Aquarium Park, a fleet admiral-like robot minion of Doctor Eggman named Admiral Jelly.

Act 1 starts with Sonic slowly descending into the water park and landing inside a winding tube that leads to the entrance of the park. A spectacular view of the oriental above-ground scenery Aquarium Park has to offer is displayed as Sonic blazes down a long path in Quick-Step mode through the aquatic town near the water. Throughout the stage Sonic attains the opportunity to view the wonderful world under the sea by diving into large pools of water filled with all sorts of marine life, plants, and oriental structures. After crossing the ocean, Sonic lands on a slowly descending platform with Egg Pawns dropping from the sky. Afterwards, Sonic must Quick-Step to avoid the large water capsules in his path and smash large metal crates into the rows of Egg Pawns blocking his way. Sonic is then lead to small pool of water where the Goal Ring resides. The Cyan Laser and more prominently, the Yellow Drill, are the wisps found in this act. Sonic must use their powers to reach new areas in the stage. Instead of being used for digging, the Yellow Drill is used underwater to transform Sonic into a rocketing torpedo.

The Nintendo DS version Aquarium Park looks almost identical to the Wii, albeit fully 2D side-scrolling gamplay. The Wisps used here are Cyan Laser and Yellow Drill, but like the Wii version the Drill is only used underwater as a torpedo. While underwater, different gimmick are seen. One of which is a swimming circle of fish, which Sonic can grab onto and fling himself off (usually to another fish circle). There are also special Cyan Laser gimmicks in which Sonic can enter as Cyan Laser and come out in four different strands, destroying enemies, then going into an end one and returning to normal Cyan Laser.

Act 2 starts with Sonic racing along collapsing platforms players will find. The only Wisp here is the Blue Cube. Using it players can walk on otherwise uncharted territory to find red rings; in this act you can't go on the ground, you are only jumping across floating platforms to get towards the goal.

Act 3 starts with Sonic stretching by one of the large pools after he gets going he find platforms with fans underneath them. Here players will have to navigate treacherous waters while being push downward by currents produced by the fans. The only Wisps here are the Orange Rocket and Purple Frenzy.

Act 4 begins with Sonic jumping on a spring to get to a corkscrew pathway. While running down this pathway Sonic encounters a massive robot resembling a lobster that is similar to the Interceptor from Sonic Unleashed, known as the Giant Crabmeat. After escaping it's clutches, Sonic runs through more of the structures using the Cyan Laser and the Yellow Drill to go through the act. In this part of Aquarium Park, Sonic has to go through areas with more water.﻿ Sonic then ends the level by running down a steep grade while being chased by the Giant Crabmeat from beginning of the stage. After reaching the bottom of the grade, the Giant Crabmeat collides into the ground and explodes, leading Sonic to break open a Wisp Capsule.

Act 5 is relatively short. Players come across yellow tri-springs which keep up with Sonic's movements only from left to right. If Sonic moves from right to left the spring will continue on its path. There are no Wisps in this act.﻿

Act 6 begins with Sonic on a short, narrow platform leading him directly underwater. Here Sonic uses the Yellow Drill to maneuver his way through tunnels, against currents, and avoiding spikes. After exiting the body of water, Sonic comes across a large, beautiful waterfall that leads to a section that utilizes the Green Hover Wisp to reach different sections of the stage. Sonic then comes across a room filled with Egg Pawns and Crabmeats which he must defeat before advancing further into the stage. Sonic is then lead to another large body of water where he must dodge killer eels before reaching the Goal Ring.

Act 6 also features shoals of small, orange fish which help Sonic when he passes through them. They allow him to take one hit from enemies without losing rings or dying and also stop him drowning. This makes their effect comparable with the Water Shield from Sonic 3 & Knuckles. However they will leave Sonic after 20 seconds or when he resurfaces, whichever comes first. If the drowning timer had already started before coming into contact with the fish, it will restart from 5. 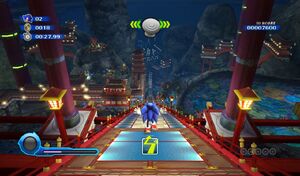 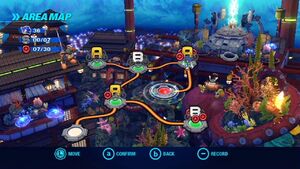 An area map of the Aquarium Park zone.

An artwork of the Aquarium Park zone. 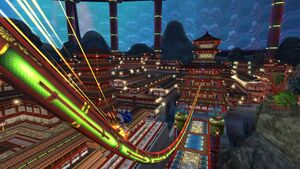 The Aquarium Park area as seen in the Wii version of Sonic Colors. 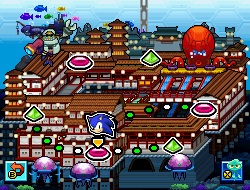 The Aquarium Park area as seen in the Nintendo DS version of Sonic Colors.

An artwork of the Aquarium Park tourist attraction. 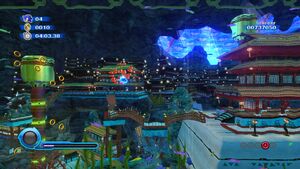 The exotic underwater elements of the Aquarium Park tourist attraction. 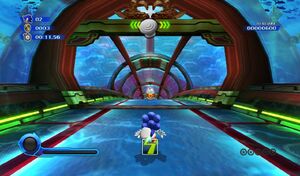 Inside one of the winding tube-like tunnels of the Aquarium Park. 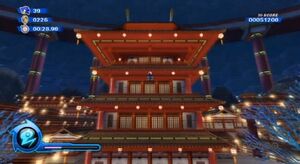 Outside the pagoda-styled town-like environment of the Aquarium Park. 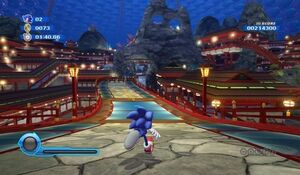 Sonic among many others are "welcomed" to the Aquarium Park.
Add a photo to this gallery

Retrieved from "https://evil.fandom.com/wiki/Aquarium_Park?oldid=63295"
Community content is available under CC-BY-SA unless otherwise noted.