The Evil Wiki
Register
Don't have an account?
Sign In
Advertisement
in: Villainous Tools and Other Items, Technology, Elementals

The Ark of Napishtim is a gigantic weather-control system, created by the Eldeen civilization from black emelas (emelas are special minerals which the Eldeen taught the humans how to create). It served to control the sea level in order to protect those without wings, such as humans and the Rehdans.

A long time after it's creation, a group of humans seized the black sword Almarion, the key to activate the Ark, and sought to control the ark so as to obtain the knowledge to create black and white emelas, the most powerful kind of emelas. However, they lost control over the Ark, causing a rise in the seal level which threatened to engulf all continent.

The goddess Alma, one of the Eldeen, sealed the Ark with her own body, preventing a catastrophe and creating the Great Vortex, which prevented outsiders from approaching the Ark.

The humans responsible for this event migrated to the continent of Eresia and named themselves the Clan of Darkness, deciding to atone for their mistakes. 800 years later, Ernst, one of their descendants, breaks the seal upon the Ark, reactivating it using Almarion. Once he is defeated by Adol, history repeats itself and the Ark goes out of control, forcing Adol to stop it before it can cause another tragedy. Adol fights the core of the Ark and destroys it, causing the whole Ark to explode. 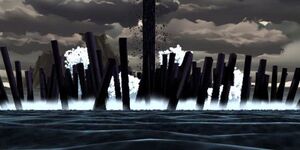