The Arkenstone, also known as "The King's Jewel", the "Arkenstone of Thrain" and the "Heart of the Mountain", was a wondrous gem sought by Thorin Oakenshield in J. R. R. Tolkien's The Hobbit. It was discovered beneath the Lonely Mountain (Erebor) by Thorin's ancestor Thrain and shaped by the Dwarves. The Arkenstone became the family heirloom of Durin's folk, but was lost when the dragon Smaug stole the mountain from the Dwarves.

The Arkenstone shone of its own inner light, and appeared a little globe of pallid light in darkness, and yet, cut and fashioned by the dwarves, it took all light that fell upon it and changed it into ten thousand sparks of white radiance shot with glints of the rainbow. This appearance leaves the question if the Arkenstone actually is one of the three famous Silmarili. The Hobbit, chapter XIII, "Not at Home". Of the three Silmarili, it seems most likely to have been the one taken by Maedhros, which is "taken into the bosom of the earth" when he casts himself into a "gaping chasm filled with flames.".

Significance in The Hobbit

The Arkenstone was a gem, the most prized object by Thorin Oakenshield of all the treasure of Erebor. Such did he consider its value that he was willing to trade 1/14th of all the gold and silver of Smaug's hoard for it. In the recent The Hobbit movie it is presented as the most valued possession of Thror, King Under the Mountain, of the house of Durin. In these movies, when Smaug attacked Erebor, Thror's first action was to collect the Arkenstone. Unfortunately, as he tried to flee, he was confronted by the dragon in the gold hoard, causing him to drop the Arkenstone and lose it amongst the gold that Smaug was hoarding. Thorin stopped him from searching for it, helping him to escape from the dragon instead.

When Bilbo Baggins found it on Smaug's golden bed deep inside the Lonely Mountain, he pocketed it, having learned how much Thorin valued it. While the Dwarves with Thorin sorted the treasure, Thorin sought only the Arkenstone, unaware that Bilbo was hiding it in his pillow. The Hobbit, chapter XVI, "A Thief in the Night". When the Dwarves refused to share any of the treasure with King Thranduil and Bard, who had killed Smaug the Magnificent, Bilbo crept out of the Dwarves' fort inside the Mountain, and gave them the Arkenstone; Bard, Thranduil, and Gandalf then tried to trade it for Bilbo's fourteenth share of Smaug's hoard. An evil army arriving from the Grey Mountains (Ered Mithrin) interrupted the dispute, the Battle of the Five Armies ensued, and Thorin was killed. The Arkenstone was placed upon Thorin's chest within his tomb deep under the Lonely Mountain, and so was returned to the earth at last.

The Hobbit: The Battle of the Five Armies

After the death of Smaug at the hands of Bard the bowman of Lake-town, Thorin descended into madness over his obsessive love of the gold of Erebor's treasure hoard (which referred as "Dragon Sickness") and as he and the other dwarves searched and searched for the arkenstone, it is revealed that Bilbo stole the stone during his encounter with Smaug while using the One Ring and knows that it should be kept from Thorin.

When the elvenking Thranduil and the people of Lake-town arrive and threaten to wage war over a share of the treasures of the mountain, it is revealed that Bilbo gave the Arkenstone to them so that they may strike a bargain to return the arkenstone to Thorin in exchange for what he promised them, but Thorin would not "treat with any man while they lie before my door armed for war".

Thorin called his army of dwarves, lead by his cousin, Dain Ironfoot, to defend the mountain. However, before a conflict between man, elves and dwarves could come to war between them, the armies of Sauron arrived, two armies commanded by both Azog the Defiler and his son, Bolg, which lead to the dwarves, elves and the humans putting aside their disputes and each united against the orc armies in the memorable Battle of the Five Armies.

The Arkenstone was eventually returned to Thorin, who was killed by Azog during the ensuing battle. 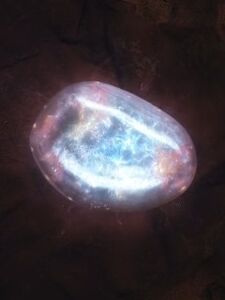 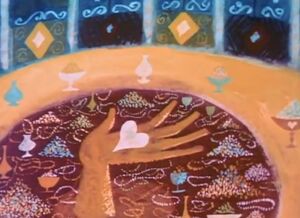 The Heart of the Mountain (the Arkenstone) as seen in illustrator Gene Deitch's animated short film The Hobbit!. 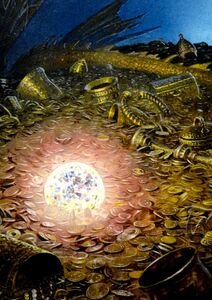 The Arkenstone of Thrain

The Arkenstone of Thrain (the Arkenstone) as seen in The Hobbit: The Desolation of Smaug.

The King's Jewel, also known as the Arkenstone.
Add a photo to this gallery

Retrieved from "https://evil.fandom.com/wiki/Arkenstone?oldid=91556"
Community content is available under CC-BY-SA unless otherwise noted.