The Ascension Ceremony (in Japanese: 帰天 Kiten) is a secret, magical ritual created by the religious organization known as the Order of the Sword.

About the Ascension Ceremony

From the Order of the Sword's point of view, The "ascended" assume "angelic" appearance and powers, although in reality they merely become human-demon hybrids that can switch from one form to another at will. It seems that the ritual can resurrect the recently dead, as it was with the Order's beloved leader Sanctus, although it is possible that he was brought barely alive and healed in the process instead of being resurrected.

In Devil May Cry 4: Deadly Fortune, it is said that those who attempt the ritual, but are too weak, can turn into demons and lose their sanity.

Although not mentioned directly, it is possible that the ritual was developed by Agnus himself, through research into the true Hell Gate and fragments of the "Dark Angel". The ritual is known to be used on Sanctus, Agnus, and Credo, and also on the Holy Knights who became Alto Angelos.

The ritual is only partly shown during Sanctus's "ascension". Whether Sanctus died from Dante's attack or was merely severely injured is unknown, but he has already healed from the bullet wound by the time Nero reaches Fortuna Castle and is lying on a bed-like altar beneath a canopy at the Order's headquaters. With Credo watching over him dilligently, Sanctus wakes fitfully. Agnus then enters the room and compliments His Holiness, but Credo blocks him from getting too close to the recently ascended Sanctus. 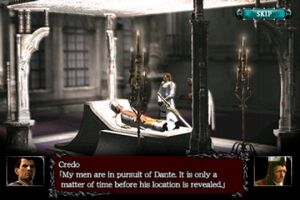 Retrieved from "https://evil.fandom.com/wiki/Ascension_Ceremony?oldid=47331"
Community content is available under CC-BY-SA unless otherwise noted.