The Asteroid Coaster is an interstellar, roller coaster-like asteroid field-themed park that is one of the most phenomenal attraction areas of Doctor Eggman's Incredible Interstellar Amusement Park and the sixth stage of Sonic Colors. Asteroid Coaster takes place in an asteroid field with toxic green acid pools, several gravity-defying, high-speed roller coasters and even several Saturn-like metal planets.

The coaster has a prehistoric theme, with the track made from bone-shaped pieces, and various fossils decorating the surrounding asteroids. The coasters have suicidal tendencies, and frequently launch themselves into pits, so you should be ready to jump out at all times. The Purple Wisp is unlocked by completing Act 1 in the Wii version and the Violet Wisp is unlocked by entering the zone for the first time in the DS version. There is a boss encountered in the Asteroid Coaster, a skeletial, orca whale-like warship of Eggman called Frigate Skullian.

Sonic starts off emerging from a giant asteroid onboard a coaster. There are rings that can be grabbed by jumping at the right timing. Shortly afterwards he must jump through some rainbow rings to prevent being thrown into a pit. The Purple Wisp is then introduced and Sonic uses this to chomp his way through obstacles. A secret path can be exploited by breaking the obstacles to the right at the end of the path.

Sonic must then negotiate gaps leading down to pools of green sludge before being catapulted into another coaster. Another pit is coming up, but luckily there is another train to the right which Sonic can jump onto to escape death. There are two paths that can be taken after jumping through the booster rings, either the fans or using the Homing Attack on the Egg Pawns on a nearby platform. After exploring the Nega-Wisp Factory once again, he is thrown outside where he must Homing Attack some asteroids to keep going before eventually reaching the Goal Ring. During this section there is a part involving some platforms and gravity that inverts above a certain height.

In this Act Sonic makes his way up a kind of tower. There are sections of wall here which will push Sonic off of certain platforms, either individually or in pairs if he stays on them for too long so he has to move quickly. Some act as platforms which must be carefully jumped on to progress. The Purple Wisp reappears in this act. After leaving the tower there is another section involving being launched between various objects, during which Sonic must be ready to Homing Attack springs and asteroids. There will then be some more pusher walls and confusing gravity flips before reaching the Goal Ring.

This act has Sonic starting off close enough for the Goal Ring to be heard, but he must go out of his way in order to reach it. There are numerous Egg Pawns that must be defeated first without any Rings, so take care. Sonic will come to a section with a yellow tri-spring. The stomp action must be used with care to avoid being pushed off by the pusher walls. A switch at the other end will reveal a Pink and a Blue Wisp Capsule. The Blue Wisp is unnecessary, but the Pink Wisp can be used to reach an area above with an extra life and can also be used to exit the area, collecting all the blue rings along the way for extra points. Sonic can then make his way to the Goal Ring with the aid of the wisps, or optionally reach secret areas by going back to the start and then using Wisps to obtain rings and points.

This short act is a simple race around a planet-like object with some Motobugs. A switch on the outside of the track will activate the Goal Ring. This act is the shortest of the stage and is purely 3D. There are no Wisps other than White Wisps from destroying the Motobugs.

Another short act which takes place indoors, Sonic must use switches to rotate scorching hot barriers like those found in Sweet Mountain. The Cyan and Purple Wisps must be used to progress here. The Goal Ring is reached upon using Purple Frenzy to destroy some enemies and boxes at the end of the act.

This act starts off similarly to Act 1, only this time the system of tracks is much more complex with several parallel trains to jump onto instead. Rainbow rings can be jumped through to access alternate paths. Eventually, Sonic finds himself in freefall navigating through spiked balls and collecting Rings on the way down.

The indoor section coming afterwards has platforms helping Sonic up, but there are spikes at the top so he must be ready to step off. There are strange parts involving water suspended in mid-air which must be passed through, which can be done with the aid of Purple Wisps. A 3D section ahead contains many badniks, but once again the Purple Wisp can enable Sonic to deal with them with ease.

Towards the act's end, a strange enemy is encountered as the Asteroid Coaster sub-boss which can generate spatial rifts around it. To defeat it, Sonic must jump away from the rift and use the Homing Attack at the right time to get through gaps in the shield surrounding it. The robot takes three hits to defeat and the shield rotates faster with each hit, making it more difficult to hit. Once it is destroyed, a trap door opens up which Sonic can fall through, leading to the Goal Ring and ending the act.

An artwork of the Asteroid Coaster zone. 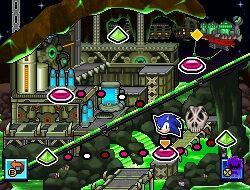 The Asteroid Coaster park as seen in the Nintendo DS version of Sonic Colors. 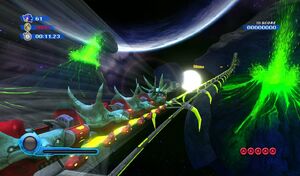 All visitors are "welcomed" by Doctor Eggman to the Asteroid Coaster. 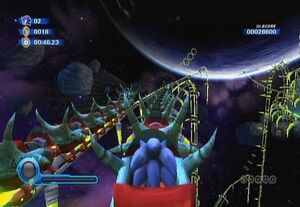 The roller coasters of the Asteroid Coaster tourist attraction. 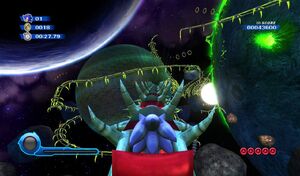 The Asteroid Coaster tourist attraction.
Add a photo to this gallery

Retrieved from "https://evil.fandom.com/wiki/Asteroid_Coaster?oldid=108796"
Community content is available under CC-BY-SA unless otherwise noted.