The Bald Mountain is a dark and morose mountain home to the great demon Chernabog and it has always been known as the source of Darkness in the Disney franchise since the sequence in Disney's Fantasia.

It is there, on Walpurgis Night, atop on this mountain's top, Chernabog rises from his slumber.

As Chernabog awakens upon Walpurgis Night, he summons his minions to his service at Bald Mountain. The insides of the mountain become a fiery volcano as he flings his minions within.

Chernabog always takes delight in tormenting dead souls and demons here at the mountain while flowing evil spirits swirls around the mountain upon his ever commmand.

Just as he begins to continue his reign of pure evil, the light of day sends the demons back to where they once were and Chernabog will always survive. 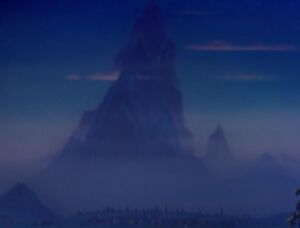 The Bald Mountain
Add a photo to this gallery

Retrieved from "https://evil.fandom.com/wiki/Bald_Mountain?oldid=97548"
Community content is available under CC-BY-SA unless otherwise noted.