Biff's Cane is a slender walking stick that was owned and carried around by Biff Tannen at old age in the year 2015.

As Biff's hands were now too feeble to hit anyone hard, the cane had a metal fist as a handle — upon which Biff's name was engraved — which he would use instead to knock people on the head with. When Marty McFly was posing as his son, Martin McFly, Jr., Biff used the metal fisted cane to rap Marty on the head while saying "Hello, hello, anybody home?", in much the same way as had been done to Marty Jr.'s grandfather, George McFly, before him.

When Old Biff stole the DeLorean time machine to travel back to 1955, he took his cane, and left it behind in the car when he returned to the future. At this point, Biff was beginning to vanish from existence due to the new history he had created by giving his younger self Grays Sports Almanac. As a result, when Biff exited the DeLorean on arrival in 2015, he suddenly clutched his chest in pain — causing the top of the cane to break off and fall inside the car.

When Marty and Emmett Brown left 2015 for 1985, the top of Biff's cane was unknown to both, and they found themselves in an alternate reality. Only after finding the cane's metal fist handle, along with a silver-colored bag containing a receipt for Marty's earlier purchase of Grays Sports Almanac from the Blast from the Past antique/memorabilia store, did they realize what had happened. 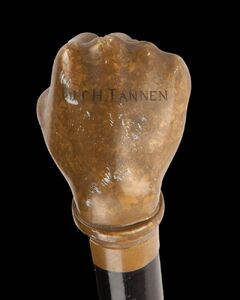 The top of Biff's Cane.
Add a photo to this gallery
Retrieved from "https://evil.fandom.com/wiki/Biff%27s_Cane?oldid=51851"
Community content is available under CC-BY-SA unless otherwise noted.