The Evil Wiki
Register
Don't have an account?
Sign In
Advertisement
in: Mature, Weapons, Villainous Tools and Other Items, Mechanical Modification

The Binary Sword is a metallic sword that serves as Jesus' signature weapon. It is a well-known item in the 2002-2021 animated web series Madness Combat.

The Binary Sword looks like a longsword with The numbers 100111100 inside the blade, which would translate binary to decimal, it would give the number 316. This would also translate 3:16 chapter of Gospel of St. John in the Bible, and with it's Sharp edges on the top.

The Binary Sword would be first shown in Madness Combat 3, it would be a minor weapon and Jesus used it to Impale Hank but then got shot by Hank himself.

The Sword would appear at the end of MC 4, it would be used by Hank he used it by Killing Grunts while he fights thought his way. Hank would later make it to the dance floor and eventually he uses it at his near death too kill an undead agent before killing himself Jesus and the undead agent.

The Sword would also appear in the middle of MC 5, Jesus would try to kill hank with it but hank fled the scene. Hank and Jesus would fight at the cliff and Jesus almost got a hit with the weapon, but then Hank would fall on the ledge below. Jesus would send his Zombie army to Murder Hank, but hank would shoot them and kill them. After this Jesus would have a minor fight with Hank before pushing him to the bottom of the canyon. 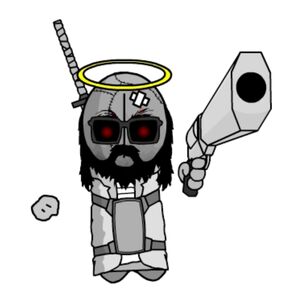 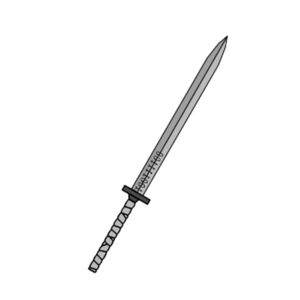 The Jeues VS Hank Fight
Community content is available under CC-BY-SA unless otherwise noted.
Advertisement