The Black Coats (in Japanese: 黒のコート, Kuro no kōto), also called the Black Cloaks (in Japanese: 黒マント, Kuro Manto) or just Coats (in Japanese: コー​​ト, Kō ​​ to), are the magical form of clothing that allows the people that wears them to safely pass through the Corridors of Darkness and they are one of the well-known items featured in the Kingdom Hearts universe. They are most noticeable as the uniforms for Organization XIII, but one Black Coat is first used by Master Xehanort in Kingdom Hearts Birth by Sleep as an alternative to the Keyblade wielders' traditional Keyblade Armor. Several characters outside of the Organization wear this coat, including Riku, King Mickey, Ansem the Wise, a Moogle, and the Unknown (Young Xehanort).

The Black Coat's main purpose is to resist the corruption inflicted upon one's heart when they pass through a Corridor of Darkness. It also seems to be able to change shape to fit its wearer, as seen when Xion shifts from her normal form to Sora's, and when Riku changes into his Ansem form.

All these hint that donning the coat transforms whatever clothing the coat's bearer is wearing under it into the black gloves, pants, and boots seen on all the coat's wearers. However, Roxas's sneakers are visible under his coat in several of his appearances.

The Black Coats were originally designed for Roxas and Riku in the secret video "Another Side, Another Story..." simply as a way to disguise them while they were still being designed for Kingdom Hearts II.

It was again used simply to hide Xemnas's face during his optional boss battle in Kingdom Hearts Final Mix and in Deep Dive, starting the trend of all Organization members wearing it.

Nomura stated in an interview that his initial idea for "The Gathering" was to have Terra, Aqua, and Ventus wear similar coats to the Organization XIII coats to hide their at-the-time undesigned faces, but felt that he could not use black coats once again, and so he stuck with armors instead.

The black coat is a full-length black coat with a hood and a waist-high slit going up the back (similar to a duster). It has a large silver zipper that fastens at the top and zips down to seal the coat. It has silver drawstrings for the hood decorated with a large silver bead hanging from the end and a silver chain ornament adorned with four large cylindrical silver beads that fastens to a loop on either side of the collarbone region.

Master Xehanort is seen wearing a black coat as he leaves Ventus, wrapped in white cloth, on Destiny Islands.

The Unknown, also wearing a black coat, later appears at the Land of Departure and battles Terra, Ventus, and Aqua, only to lose and depart.

The Unknown is seen wearing the black coat when he attacks Sora in Hollow Bastion.

In Kingdom Hearts 358/2 Days, like all of the Organization members, Roxas, Riku, Xion, and Mickey wear the coats. The Moogle who becomes available to purchase items, also wears the Black Coat, as a sign of it servicing Organization XIII.

Riku and King Mickey are given Black Coats by DiZ, who obtained them through unknown means, so that they would not be tracked down by Organization XIII. Riku continues to wear the coat throughout Kingdom Hearts 358/2 Days and Kingdom Hearts II, until the explosion of the Kingdom Hearts Encoder returns him to his original form.

In Kingdom Hearts II, all the members of Organization XIII wear the black coat. King Mickey also dons the black coat until he took it off later in the game, and Riku is seen wearing it whilst assuming the appearance of the Seeker of Darkness. He takes it off after reverting back to his original form. In Kingdom Hearts II Final Mix, the Mushroom XIII are also seen wearing the coat.

In Kingdom Hearts coded, Jiminy's Journal takes on the form of Riku when the latter was wearing an Organization XIII coat.

When Aqua comes across Ansem the Wise at the Dark Margin in the Realm of Darkness, he is wearing a black coat.

Xemnas, Lea, Braig, Isa and Young Xehanort all wear black coats throughout. The Anti Black Coat wears a somewhat stylized version, possessing purple flame designs on the base and ends of the sleeves, as well as a blue Nightmare Dream Eater symbol on the back.

Among the most notable characters that sport the Black Coats are the members of Organization XIII. Although all coats have a same basic design, they are not completely uniform in appearance. For instance, Axel's coat has tight sleeves, while Xigbar and Demyx both wear coats with pointed shoulders.

Additionally, Vexen's coat is longer than most other members, to the point that it covers his feet and its sleeves partially cover his hands. Roxas and Xion in Sora's form wear what appear to be black sneakers, while Larxene and Xion in her normal form wear heeled boots. 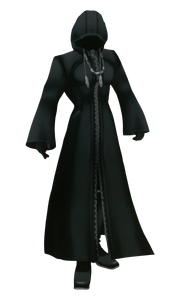 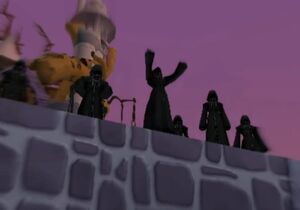 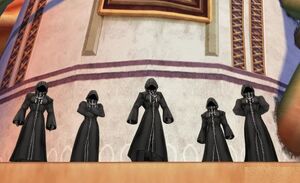 The Organization XIII wearing their Black Coats as seen in an omitted scene of Hollow Bastion in the trailer of Kingdom Hearts II. 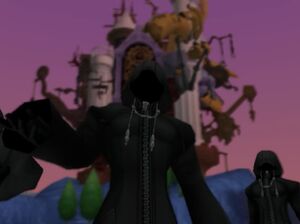 The Organization XIII wearing their Black Coats as seen in Kingdom Hearts II. 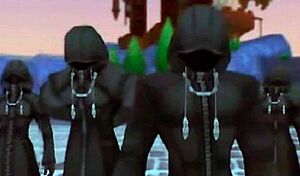 Members of the Organization XIII wearing their signature Black Coats.
Add a photo to this gallery
Retrieved from "https://evil.fandom.com/wiki/Black_Coats?oldid=55407"
Community content is available under CC-BY-SA unless otherwise noted.