The Evil Wiki
Register
Don't have an account?
Sign In
Advertisement
in: Oppression, Villainous Tools and Other Items, Dark Forms,
and 3 more

The Black Roses are enchanted plum-colored flowers that Prince Phobos created and used to protect himself and defend his castle. They first appeared in the W.I.T.C.H comic book series.

To materialize these plants, he tried to convince the royal gardener to culture the evil flowers but he refuse, Phobos cruelly came into action and transformed the gardener's family into the first roses. These black roses have the ability to turn anyone it has pricked on by its thorn into another rose and so formed a barrier surrounding the castle protecting Phobos from any outside threats.

The Black Roses made an appearance throughout the first season of the animated series W.I.T.C.H. when Phobos have stolen the throne of Meridian and corrupted and tyrranized the whole kingdom, before his defeat at the hands of both the W.I.T.C.H girls and his sister Elyon. 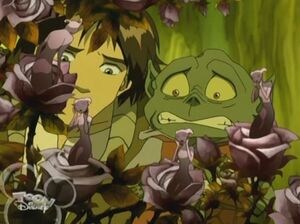 The Black Roses with the Whisperers hiding inside them in the W.I.T.C.H. animated series.
Community content is available under CC-BY-SA unless otherwise noted.
Advertisement