The Evil Wiki
Register
Don't have an account?
Sign In
Advertisement
in: Transportation, Dark Forms, Paranormal,
and 5 more

The Black Slime Portals are interdimensional doorways created from the Black Slime. The ghosts under the command of Ivo Shandor and the Gozer Worshippers, uses these portals to attack the Ghostbusters team.

These conduits or dimensional rips provide temporary and highly unstable portals between our world and the ghost world. It is not known if these portals are formed in especially dense pockets of Black Slime or if the portal forms first and the Black Slime follows through the resulting weakened dimensional intersection.

Either way, these conduits are inextricably tied to Black Slime, and the neutralization of surrounding Black Slime has been known to close the Black Slime Portal as well.

These Black Slime conduits can often be more dangerous than the creatures they spawn. If left unchecked, they can spawn endless amounts of enemies.

Contact protocol dictates that Black Slime Portals should often take priority over other entities in the vicinity. Seal the conduits with positively charged slime before allowing more enemies to flood the battlefield. 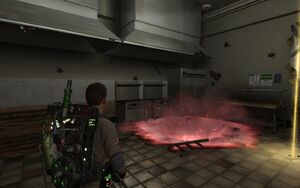 A Black Slime Portal, a dangerous supernatural vortex created from the Black Slime itself.
Community content is available under CC-BY-SA unless otherwise noted.
Advertisement