The Black Stone, also known as "The Monolith", is a mysterious black monolithic stone prized and presided over by its "master", and a supernatural relic that is plays a major eponymous role in the classic short story "The Black Stone" by Robert E. Howard, first published in the November 1931 issue of Weird Tales which introduced the mad poet Justin Geoffrey and the fictitious Unaussprechlichen Kulten by Friedrich von Junzt, and it is featured in the Cthulhu Mythos genre by H. P. Lovecraft.

The story opens with an unnamed narrator being gripped with curiosity by a brief reference to the Black Stone in the book Nameless Cults, aka The Black Book, by Friedrich von Junzt. He researches the artifact but finds little further information. The ancient (though its age is debated) monolith stands near to the village of Stregoicavar ("meaning something like Witch-Town") in the mountains of Hungary. There are many superstitions surrounding it, for instance anyone who sleeps nearby will suffer nightmares for the rest of their life and anyone who visits the stone on Midsummer Night will go insane and die. Though the Monolith is hated and disliked by all in the village, it is said by the Innskeeper that "Any man who lay hammer or maul to it die evilly." So that all of the villagers simply shun the stone. (though the narrator notices damage done to the stone."

The narrator decides to travel to Stregoicavar on vacation. Along the way he hears of the local history and sees the site of an old battlefield, where Count Boris Vladinoff fought the invading Suleiman the Magnificent in 1526. Local stories say that Vladinoff took shelter in a ruined castle and was brought a lacquered case that had been found near the body of Selim Bahadur, "the famous Turkish scribe and historian", who had died in a recent battle. The unnamed contents scared the count but at that moment Turkish artillery collapsed the castle and killed the occupants.

Reaching the village, the narrator interviews some of the villagers. The current inhabitants are not the original people of the village - they were all wiped out by the Turkish invasion in 1526. They are said to have been of a different, unknown, race than the Hungarians with a reputation for raiding their villages and kidnapping women and children. A school teacher reveals that according to legend, the original name for the village was Xuthltan and the stone was worshiped by pagans at one time (although they probably did not erect it themselves). The black stone is "octagonal in shape, some sixteen feet in height and about a foot and a half thick."

A week after arriving the narrator realizes that it is Midsummer Night and makes his way to the stone. He falls asleep an hour before midnight but wakes to find the chanting and dancing people around the stone. After much dancing, during which the narrator is unable to move or do anything but observe, a baby is killed in sacrifice. Shortly a giant toad-like monster appears at the top of the stone and a second sacrifice, a young girl, is offered to it. The narrator faints at this point and decides that it was a dream when he wakes again (there is no evidence of any of the night's events).

Thinking back to the earlier tale, he decides to secretly excavate the ruined castle at night and recover the box that was buried along with Count Boris Vladinoff. He translates the text of a scroll found inside the crushed box, which turns out to be a record of Selim Bahadur's raid into the valley. The Turks found the toad-monster worshipers and eradicated them all. They also found in a nearby cave "a monstrous, bloated, wallowing toad-like being and slew it with flame and ancient steel blessed in old times by Muhammad, and with incantations that were old when Arabia was young". The narrator realizes that his "dream" was actually a vision of a real event in history and that the Black Stone is really the spire of a massive fortress, while the cliffs that surround it are its battlements. The rest of the castle lies buried under the Hungarian mountains. He throws the scroll and a small gold idol of the toad (also from the box) into the Danube.

The narrator ends with the belief that the words of the Nameless Cults are real and not "the ravings of a madman" as he had at first. With this comes the thought "Man was not always master of the earth--and is he now?". 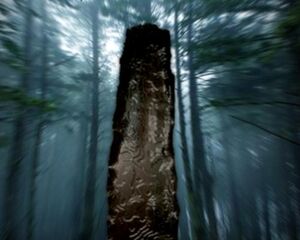 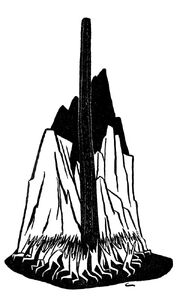 The Monolith, also known as the Black Stone. 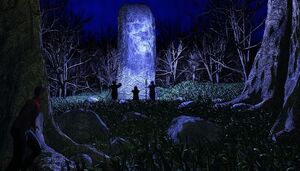 The Monolith
Add a photo to this gallery

Retrieved from "https://evil.fandom.com/wiki/Black_Stone?oldid=47896"
Community content is available under CC-BY-SA unless otherwise noted.