The Blast-O-Matic was a doomsday device King K. Rool attempts to use to destroy the Donkey Kong Island during the events of Donkey Kong 64.

This large laser cannon was designed by the weasel technician Snide, who is deprived of the weapon's blueprints and his membership in the Kremling Krew by K. Rool before the game begins. According to the blueprints, this weapon is composed for main computer, five reactors rooms and two bonus drums incorporated into mechanical "Crocodile Isle". This weapon was the K. Rool's plan B to destroy the DK Island (since plan A was to use his gigantic brother K. Lumsy, but he refusing this function).

To buy time to repair the weapon after the Crocodile Isle collides with a rock near the island, K. Rool imprisons Diddy Kong, Lanky Kong, Tiny Kong, and Chunky Kong and confiscates Donkey Kong's Golden Banana hoard. When K. Rool intended to activate the gun in time, Snide hack into the main computer by putting the timer after the Kongs recover his blueprints. The machine was shut off by 5 Kongs resulting in the end of Kremling Krew's menace.

The Blast-O-Matic makes a return appearance in this game as King K. Rool’s Final Smash. If K. Rool breaks a Smash Ball, He will active the weapon from the safety of his island lair, laughing as the Blast-O-Matic charges up and fires a massive beam of energy that causes tremendous damage to his opponents while also destroying Donkey Kong Island in the process. 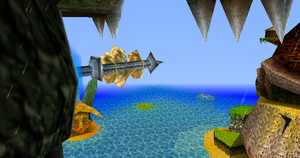 The Blast-O-Matic aiming at the DK Island. 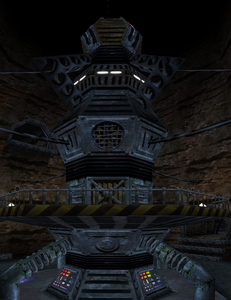 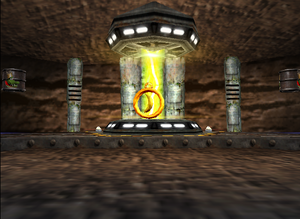 Blueprint of the Blast-O-Matic weapon. 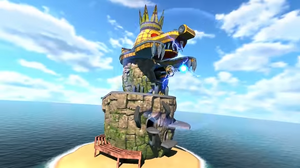 The Blast-O-Matic on Crocodile Isle in Super Smash Bros. Ultimate.

The Blast-O-Matic in action.
Add a photo to this gallery

Retrieved from "https://evil.fandom.com/wiki/Blast-O-Matic?oldid=68032"
Community content is available under CC-BY-SA unless otherwise noted.