The Evil Wiki
Register
Don't have an account?
Sign In
Advertisement
in: Mature, Magic, Elementals,
and 8 more

Eons ago before Mortal Kombat

Countless victims including those who practiced/performed Blood Magik

To infect and corrupt anyone who practiced the art of Blood Magic.

To transform anyone who successfully used both Blood Magik and the Kamidogu in an unique rite into a Blood God.
To aid Lord Raiden and the Elder Gods in keeping Lord Shinnok trapped inside his Sacred Amulet.

Blood Magik is an ancient forbidden blood-imbued form of dark magic and it is introduced as both a concept within the Mortal Kombat videogame franchise and a functioning major plot element in Mortal Kombat X: Comic Series based on the video game Mortal Kombat X.

This awesome but dangerous sorcery is shown as firing lightning-like streams of crimson-red magical energy, the most common characteristic trait of this power.

Acting as a power amplifier of sorts, this great and terrible magic is capable of increasing the strength, speed, and agility of whoever uses this power as well as giving him or her new enhanced abilities such as enhanced regeneration, increased freezing power or solar (sun) empowerment.

But with every power comes a price: any soul who used Blood Magik ends up in a bloodthirsty frenzy, attacking friends and foes alike without mercy and being driven insane as a resulting side effect of this forbidden sorcery.

In order to invoke and activate Blood Magik, one must spill their blood by their hands in a ceremonial phase known as the "Blood Code". 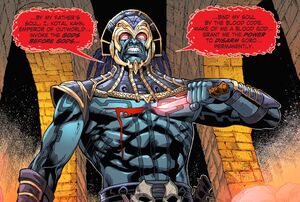 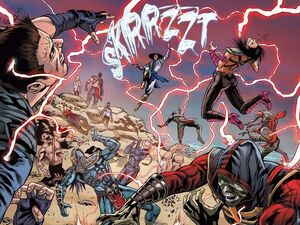 Raiden under the influence of Blood Magik. 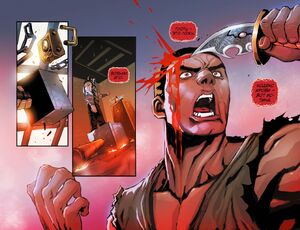