Bloodbending was originally created by the Waterbender Hama, while she was imprisoned in a Fire Nation Prison. During her time in her cell, Hama realized that where there's life, there's water. So every full moon, she decided to perform Waterbending on the elephant rats that scurried around her cages. After she was successful with Bloodbending the rats, on the next full moon, she use her new abilities on one of the prison guards. The prison guard unlocked Hama's cell and she was able to escape. However, instead of returning home, Hama decided to get her revenge, by Bloodbending random citizens of the Fire Nation into a cave on top of a mountain, chain them up, and left them to rot.

As the years went by, Hama realized that she was growing old, and she need an heir to pass down her Bloodbending technique. One day, which was also a few days before the next full moon, Hama overheard Katara and her friends. She heard that Katara was both from the Southern Water Tribe, and a skilled waterbender. So Hama invited Katara and her friends to her hotel. She did this to earn Katara's trust and teach her a few other techniques and eventually Bloodbending. On the night of the full moon, Hama explained about the power of Bloodbending. After hearing about the powers of Bloodbending, Katara wanted nothing to do with it. Enraged, Hama used Bloodbending on Katara. However, Katara proved to be a much stronger Waterbender and she was able to break Hama's control. As the two were fighting each other, Aang and Sokka, who learned of Hama's secret, showed up to assist Katara. However, Hama used her Bloodbending technique to control Aang and Sokka's body. Just as she was about have the two kill each other, Katara had no choice but to Bloodbend Hama. After which, Hama was arrest, presumably for the rest of her life. But before she was taken away, Hama congratulated Katara for being a Bloodbender. Terrified of the power that Bloodbending can do, Katara promised herself that she would never use Bloodbending on anyone ever again. However, Katara does end up breaking that promise once, when she and Zuko went on a search for the man who killed her mother.

Some time after the 100 year war had ended, Katara wanted to make Bloodbending illegal. Eventually Bloodbending became illegal to use, and illegal to be taught. Anyone who was found guilty of using Bloodbending to teaching Bloodbending was sentenced to life in prison. However there were some gifted Waterbenders who could perform Bloodbending without the use of a full moon and used Bloodbending to perform various crimes. One of them being Yakone, a crime lord of Republic City. Some of his victims claimed that Yakone performed Bloodbending, but Yakone denied this as there was no full moon during any of the time they claimed he perform any Bloodbending technique. Despite this, Yakone was found guilty during a trial, and was sentence to life in prison. Before he could be taken to prison, Yakone performed a new form of Bloodbending; Psychic Bloodbending, in which the user barely needs to move a finger in order to Bloodbend. Yakone Bloodbended everyone in the courtroom, including Aang, Sokka, and Toph. Yakone attempted to escape, but Aang managed to catch up to Yakone, capture him, and took away his bending.

While Yakone was in prison, some of his servants managed to break him out. After having his face surgically alter, Yakone went to the Northern Water Tribe. There, he fell in love with a local woman, got married, and had two sons; Noatak, and Tarrlok. Yakone eventually found out that both of them could Waterbend. So during a full moon, he took his sons went out to do some "hunting". He told his sons that he was a crime lord with the ability of Bloodbending. He also told them that the Avatar was the one responsible for making him powerless. He even told his sons that they could help him get revenge on the Avatar. So every full moon, Yakone would take his children and teach them Bloodbending. Noatak proved to be a prodigy, while Tarrlok didn't have the stomach to use the technique. One day Yakone brought Noatak and Tarrlok in the middle of the day to perform Bloodbending without the use of a full moon. Both of them were able to perform the technique without the use of the full moon. However, Noatak eventually discovered that he could perform the same Bloodbending technique that his father could perform; Psychic Bloodbending. One day Yakone forced his sons to Bloodbend each other. Noatak was able to Bloodbend Tarrlok without any effort, but Tarrlok was hesitant, because he didn't want to Bloodbend any human being. Enraged, Yakone was about to smack Tarrlok, but Noatak Bloodbended his father. While Yakone was trapped by Noatak's psychic grip, Noatak tried to convince Tarrlok to run away with him. Tarrlok didn't want to run away, so Noatak ran off. Both Yakone and Tarrlok thought that he had perished out them. So Yakone stopped training his son and died a few years later.

Next Step of Bloodbending

It turned out Noatak had survived the blizzard. As he was growing up, Noatak eventually learned of a new level of Bloodbending; Bending Severing. By performing both chi blocking and Bloodbending at specific area, Noatak could take away a person's bending. Noatak, now known as Amon, decided to use his new technique to wipe out any and all benders abilities to bend the elements. 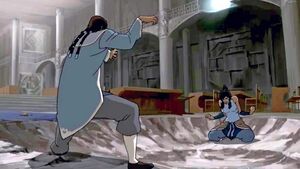 Bloodbending
Add a photo to this gallery

Retrieved from "https://evil.fandom.com/wiki/Bloodbending?oldid=79412"
Community content is available under CC-BY-SA unless otherwise noted.