The Blue Monkey is a blue sapphire diamond embedded in a monkey-like statuette in the 2003 film Looney Tunes: Back in Action. It had the supernatural ability to turn people into monkeys and back into people.

Mr. Chairman, the evil head of the ACME cooperation is first seen rambling about getting the Blue Monkey diamond to his "evil purposes" (as his minion, Bob Smith reveals it to him), and then showing interest on his Bad Ideas VP, Mary.

Later, he orders his first henchman, Yosemite Sam, to capture DJ Drake (the film's protagonist) and Daffy Duck in his casino at Las Vegas. After they escape along with Kate and Bugs Bunny to the Nevada Desert, the Chairman contacts his desert operative (Wile E. Coyote) to destroy them, but needless to say, he fails.

At Area 52, the heroes learn that the Chairman's goal is to use the diamond's power to turn every person in the world except himself and Mary into monkeys to massively produce ACME's machines and gadgets, then have them human again to buy them for profit.

Meanwhile, Mr. Chairman contacts Marvin the Martian and orders him to execute a breakout and get the map card DJ has, but they escape in the nick of time. His last attempt of taking the Looney Tunes out of the way is having Elmer Fudd to chase them at the Louvre Museum, but Kate's cellphone with a photo of the map to the diamond is stolen by Mr. Chairman's bodyguard, Bob Smith. The group travels to Africa and finally reaches the diamond, but the Chairman, Bob, and Taz the Tasmanian Devil (disguised as Granny, Tweety, and Sylvester, respectively) corner them and teleport them all to ACME's headquarters (with some minor complications).

Chairman explains that he wants the Blue Monkey so he could plant it into a satellite and turn all inhabitants of Earth into monkeys so he could then enslave them and have them build more ACME products. He would then change them into people and sell them. It is protected by traps and weapons to keep it from being stolen.

Chairman ties Kate and DJ next to a train rail where DJ's father, Damien Drake (who was kidnapped before) is tied to, waiting for ACME's Death Train to come. Mr. Chairman then gives the Blue Monkey to Marvin, ordering him to get to ACME's satellite in order to unleash the monkey laser.

Bugs and Daffy then chase Marvin through space, trying to stop him from attaching the Blue Monkey to ACME's satellite to unleash the monkey laser. However, Daffy (as Duck Dodgers) manages to throw his beak at the satellite's antenna, unleashing only two small shots, one of which hits the Chairman, turning him into a monkey, much to Mary's sorrow. Damien Drake, who had been rescued earlier, put him in handcuffs. When Daffy and Bugs crashland through the window in their ship, Monkey Chairman runs away in horror. . The Blue Monkey was then lost in space. 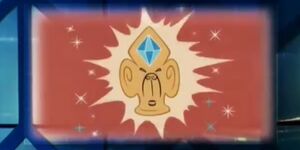 A cartoonish llustration of the Blue Monkey.

The Blue Monkey statuette.
Add a photo to this gallery
Retrieved from "https://evil.fandom.com/wiki/Blue_Monkey?oldid=83224"
Community content is available under CC-BY-SA unless otherwise noted.