The Evil Wiki
Register
Don't have an account?
Sign In
Advertisement
in: Villainous Tools and Other Items, Magic, Paranormal, Elementals

The Book of Retribution (in Japanese: 裁きの書 Sabaki no Sho), sometimes called the "Tome of Judgement" is a magical book used by Zexion, a member of Organization XIII.

This Lexicon which is similar to the Shade Archive, one of the many items in the Kingdom Hearts universe, allows Zexion to steal power from others and create illusions at will (even though he can already create illusions, the illusions that he uses with the Book of Retribution are more powerful). He also uses it to ensnare his foes into another dimension.

It is unclear exactly what the pages of the Book of Retribution contain, but from what can be seen, it tells some sort of story and lacks a basic dictionary layout. The cover is a dark grey, embossed with three white, intertwined Nobody emblems. The back bears the outline of another Nobody logo. The spine of the book displays a Roman numeral for six (6), VI, along with the title "Hallucination: Another Side", superimposed over yet another Nobody symbol; in the North American and PAL games, "Hallucination" is replaced with "Ignes Fatui" (Lat: "Delusions"). Both "Hallucination" and "Delusions" allude to Zexion's attribute of "Illusion", and the "VI" on the book references Zexion's rank as the sixth member of Organization XIII. 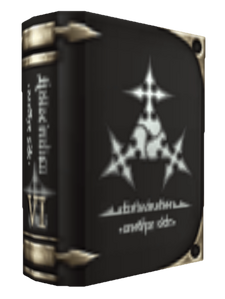 The Tome of Judgement, also known as the Book of Retribution. 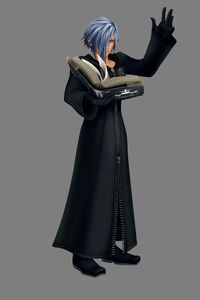 Zexion of Organization XIII his Lexicon, the Book of Retribution in his hand. 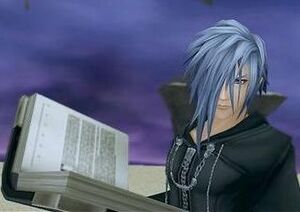 Zexion reading the Book of Retribution and understanding both its mystical secrets and magic powers.