The Books of Zeref are, as the name suggests, a series of Magic books written by the Black Mage Zeref, containing various spells of the Black Arts.

Not much is known about the appearance of each book, but the book containing E.N.D. is shown as a slightly tatty volume with various rips and tears in the cover. It has Zeref's name written in large black letters on the cover and the spine. On the front cover, there is a picture of a glowing eye in darkness with several wavy lines spiraling inwards towards it.

The books contain knowledge on the Black Arts which Zeref used. Many of the spells known to come from the books involve the creation of Demons. Each Demon is summoned by their own book. Warrod Sequen speculates that one specific book, the book of the most powerful of Zeref's Demons, E.N.D., may be in the possession of Tartaros, a Dark Guild whose members consist of Demons originating from the books, also known as Etherious.

one of the Books of Zeref. 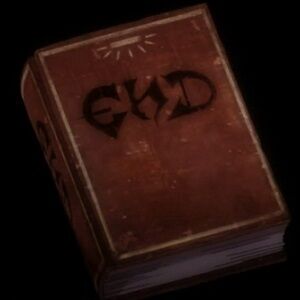 The Book of E.N.D.
Add a photo to this gallery
Retrieved from "https://evil.fandom.com/wiki/Books_of_Zeref?oldid=68286"
Community content is available under CC-BY-SA unless otherwise noted.