Bottom of the Well

The Legend of Zelda: Ocarina of Time

To serve as a place of untold dangers for those unfortunate to venture through it.

The Bottom of the Well is a location in the critically-acclaimed 1998 videogame Legend of Zelda: Ocarina of Time. Ill-will and hatred can be felt though this well's walls and corridors. It is also a mini-dungeon.

In the Kakariko Village, there stands a well. At first the well looks like an ordinary well with a dark folklore, but seven years in the future, the Well dries up, releasing an ancient evil. This Well housed many torture rooms where a Sheikah, now the withered Bongo Bongo, tortured and murdered his victims. The chambers overflow with undead zombies, ghosts, and poisonous mist.

After Link plays the "Song of Storms" for a man named Guru-Guru inside the Windmill of Kakariko Village, the Windmill, in response, starts to turn rapidly, which drains the water from the well in the process. Inside the well, Link fights a horrendous monster called the "Dead Hand". After killing the monster, he gains the Lens of Truth.

Seven year later, Link, now as an adult and after defeating Morpha in the Water Temple, travels to Kakariko Village. However, the village is set on fire. Sheik, a member of the Sheikah Clan, appears, and when Link approaches the well, Bongo Bongo's spirit breaks free of its seal. Link tries to attack the spirit, but he is knocked out.

When he wakes up, he finds out that spirit moved to the Shadow Temple. Sheik teaches him a song called the "Nocturne of Shadow", which grants him access to the temple.

Enemies inside the Well 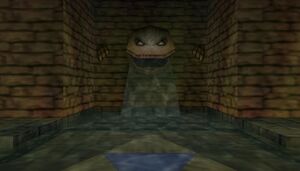 Inside the Bottom of the Well. 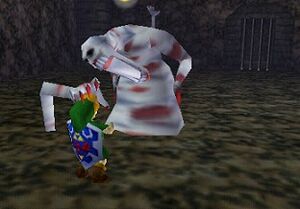 Link fights the Dead Hand monstrosity within the Bottom of the Well.
Add a photo to this gallery 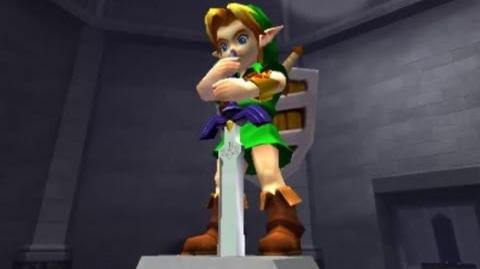 Retrieved from "https://evil.fandom.com/wiki/Bottom_of_the_Well?oldid=91134"
Community content is available under CC-BY-SA unless otherwise noted.