The Evil Wiki
Register
Don't have an account?
Sign In
Advertisement
in: Article stubs, Mature, Villainous Tools and Other Items,
and 6 more

The Bottomless Pit is a common device found in fiction and folklore - an imaginary chasm that goes on (seemingly) forever: it can also be used in a loose term for any extremely deep chasm whether man-made or natural.

It is also a common theme in scripture for the supreme spirit of evil, Satan, to be cast into a bottomless pit when he attempts a large-scale incursion into the mortal world, apparently the only way to contain the spirit (short of God's omnipotence).

The Bottomless Pit in this sense is a unique prison set forth purely to contain the power of Satan and is separated even from Hell, often an angel is tasked with both imprisoning Satan and with freeing him after a set period of time - after three such events God intervenes personally, destroying Satan completely via the Lake of Fire. 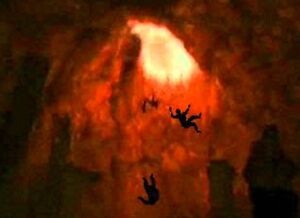 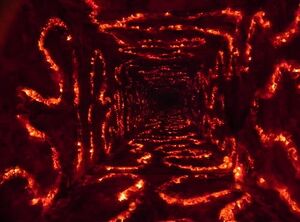 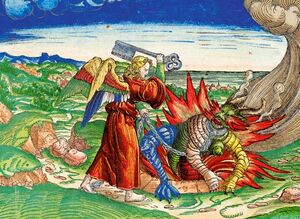 the Bottomless Pit as described in the Bible.