The Evil Wiki
Register
Don't have an account?
Sign In
Advertisement
in: Article stubs, Evil Lairs, Oppression,
and 4 more

Celebrate King Bowser's greatness and the glory of the Koopa Kingdom forever.

Bowser's Gnarty Party, also known as the "Gnarly Party", was the name of the 3rd unlockable board in Mario Party 4. It is where one of the Koopa Kid was host in a volcanic crater which was constructed to hold parties and festivities, celebrating the reign of King Bowser and the "glory" of the Koopa Kingdom.

This board was built in a pit Koopa Kingdom by the Koopa Kid as honor to Bowser's greatness. This pit is complete with lava, rocks, circular walls, castle ruins and Bowser's shell sculpture at the center of the pit. Maybe the ruins in this board were of one of Bowser's Castles which must have been destroyed by volcanic eruption.

Heros needed to obtain the stars of every board in order to enter the final showdown with Bowser, but at the same time, do not leave that easily. Because the rock bridges in this board is destroyed when cross 3 to appears leading other way, loses half of the coins when losing the Bowser's mini-games and same cheats using magic for shrinking as an opportunity of launching players from the starting point to the middle of the board, enabling them to reach Bowser while miniaturized.

When the players win, will be challenged with King Bowser's treacherous games and also face him on his fiery cube. 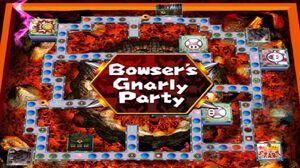 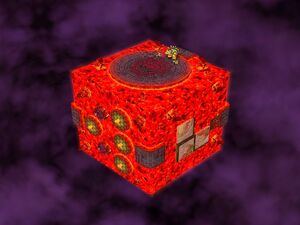 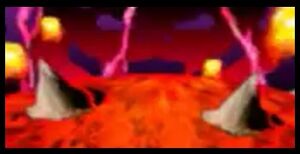