To be the place of amusement and wonder for all citizens of the Koopa Kingdom.

The Bowser Land was the second and final unlockable board that appears in Mario Party 2. It is where Toad are forced begin host of this board map by King Bowser this time. It is a fantastic amusement park that was built underground beneath the surface of the Koopa Kingdom. It is complete with a roller coaster, a Blooper carousel, pipes, countless colorful carnival balloons, garbage, a flying dirigible, and the Bowser Parade set.

Heroes needed to collect Stars from Toad to "defeat" Bowser, but at the same time, do not leave that easily. Unlike the Magma Mountain, there exists advantage and disadvantages in this board. The disadvantages is the Bowser Parade that will player back in start losing coins; the advantage is which can recover the coins in Koopa Banks, enter the pipes when someone steps on a Happening Space and swap way of Bowser Parade.

At the end of the game, Bowser appears to punish Koopa Troopa traitor when winner appears for defeat him. Thinking that all was lost when Bowser transforms into his metal form, Toad give the star to winner finally defeat it completely. 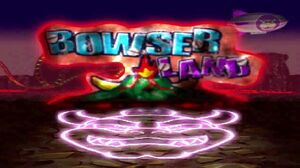 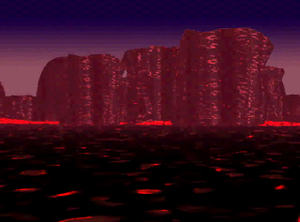 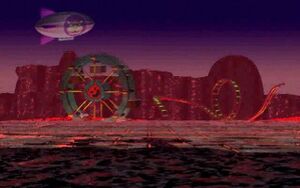 Bowser Land
Add a photo to this gallery

Retrieved from "https://evil.fandom.com/wiki/Bowser_Land?oldid=63488"
Community content is available under CC-BY-SA unless otherwise noted.