The Evil Wiki
Register
Don't have an account?
Sign In
Advertisement
in: Articles under construction, Evil Lairs, Villainous Vehicles,
and 3 more

To serve as headquarters of the Armed Brain Army Volt.

The Brain Base (in Japanese: ヅノーベース Zunō Bēsu), also known as the "Zuno Base", is the mobile headquarters of the villainous group of mad scientists called Armed Brain Army Volt, and it sits as a satellite in orbit of the planet Earth. It is a location in Choujuu Sentai Liveman.

In addition to the main chamber room, the Brain Base also contains different rooms for each of the members of Volt to conduct experiments in, though some larger experiments such as the Giga Volt may be too big in size to be properly housed and maintained in the Base, necessitating them to be held on Earth instead. It also contains a secret chamber where Bias keeps the setup for his Giga Brain Wave hidden away.

While it normally stays orbiting the Earth, the Brain Base is equipped with rockets that enable it to both enter and exit the Earth's atmosphere, as well as an arsenal of weapons that can be used to defend it from attacks. It contains the Volt's arsenal of Boffler Fighters, and can dispense them to carry out attacks or battle against the Livemen.

The Brain Base was constructed by Great Professor Bias at an unknown point in time to serve as the HQ of the Volt and to be a place for him to conduct his experiments in. He also outfitted with a secret room dubbed the "Brain Room" which he kept his Giga Brain Wave setup.

After selecting Kenji Tsukigata, Rui Senda and Gou Omura to be his students, Bias sent down a shuttle to Academia Island for them to board that transported them to the Brain Base, which became their new home. 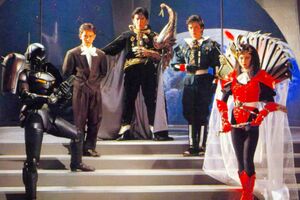