The Burns Manor is a luxurious ornate mansion located at 1000 Mammon Street, on the corner of Croesus and Mammon streets within the Springfield Heights district in the cioty of Springfield, and it is the personal namesake residence of Mr. Burns. It one of many well-known locations in the comedy cartoon series The Simpsons.

The Burns Manor was used to host a number of different festivities, extravagant parties and social events for Mr. Burns and his guests such as the Springfield Nuclear Power Plant Annual Picnic.

The interior of the mansion includes a room containing a thousand monkeys at a thousand typewriters, a bottomless pit, a human chess board, a very large TV, a 'Hall of Patriots' commemorating his ancestors, a secret laboratory, a botanical garden full of vultures bearing his likeness, a safe containing a Beefeater guard, the Lillie Langtry Theater, a theater showing the round-the-clock plays regardless of whether there is an audience, and an illegal surveillance room used to keep an eye on the entirety of the manor's premises, and a surprisingly-small basement, seemingly no larger than the basement in the Simpson family's house.

The mansion itself is also home to many rare and historical artifacts including the only existing nude photo of Mark Twain, the suit Charlie Chaplin was buried in, King Arthur's legendary sword Excalibur, and a rare first draft of the Constitution with the word "suckers" in it.

Also there is a large wine cellar with an entrance through the back of the mansion, the stairway has heads of a Dodo, a Saber-toothed Tiger, a Tyrannosaurus Rex, all of which are extinct, and a skeleton of a trespasser hung up on the wall. The wine cellar itself has hundreds of wine bottles, including a massive 60,000 dollar bottle of wine which Homer Simpson drank.

Mr. Burns has a room with a gallery full of priceless paintings, including The Concert by Vermeer which was stolen in the March of 1990. It is considered the most valuable painting ever stolen with an estimated value of $200,000,000. Chief Wiggum and Lou arrested Burns for the burglary and most likely confiscated the painting.

The Burns Manor contains 137 rooms and at least 3 floors visible from the exterior (not including the basement or the attic).

The Burns Manor made an appearance as an arena featured in the racing videogame The Simpsons Road Rage.

The Burns Manor appeared in The Simpsons: The Movie. 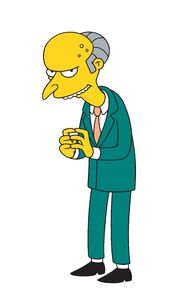 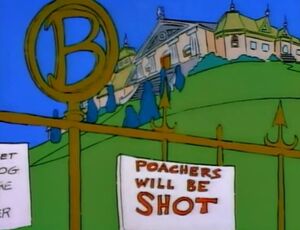 |The former appearance of Burns Manor as seen in the 1st season of The Simpsons. 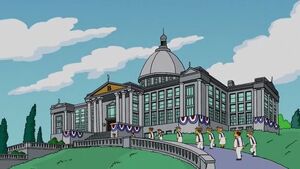 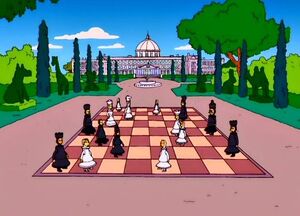 A huge chessboard at the Burns Manor with 15 people dressed as opposing chess pieces. 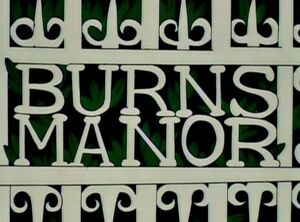 A sign on the iron gates reads "Burns Manor", the name of Mr. Burns' very own home. 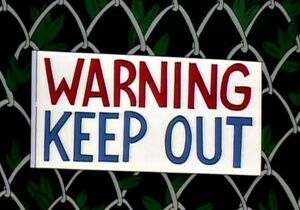 A warning sign on the chain-link fence at the Burns Manor reads "Warning Keep Out". 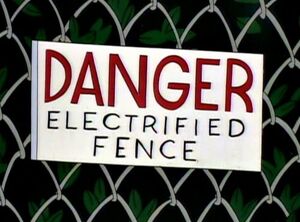 A warning sign on the chain-link fence at the Burns Manor reads "Danger Electrified Fence". 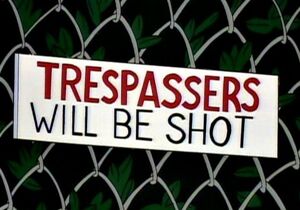 A warning sign on the chain-link fence at the Burns Manor reads "Trespassers Will Be Shot". 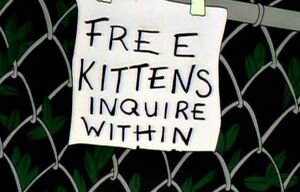 A taped paper on the chain-link fence at the Burns Manor reads "Free Kittens Inquire Within".
Add a photo to this gallery

Retrieved from "https://evil.fandom.com/wiki/Burns_Manor?oldid=63608"
Community content is available under CC-BY-SA unless otherwise noted.