The Evil Wiki
Register
Don't have an account?
Sign In
in: Villainous Tools and Other Items, Dark Magic, Wrong Hands Tools,
and 6 more

Back to page
View source

The Moth Miraculous is an magical jewel wielded by the evil villain Hawk Moth and an item featured in the animated series Miraculous: Tales of Ladybug & Cat Noir.

The Moth Miraculous is connected the kwami Nooroo and has been worn by many for years. Whenever Nooroo goes inside, it transforms the holder into a moth-themed superhero or supervillain depending on the wearer's desire. It has the power to give any person superpowers and make them loyal to the wearer. It gives the holder the ability to sense positive or negative emotions in order to locate who the exact person is. The wielder can vitalizes a butterfly and send in to possess a personal object of the person. The Moth Miraculous also has telekinetic powers, the holder is able to connect and communicate with the person telepathically through the mind. The wearer offers him or her superpowers, if they accept, they'll transform into super beings. In addition, the holder can control the person's body to a expanse.

The jewel is currently owned by Hawk Moth who is using it for evil. He creates super villains in a attempt to capture Ladybug's and Cat Noir's Miraculouses. However there is a limit. Hawk Moth can only akumatize one villain at a time, and has to wait an certain amount of time before creating another since he corrupted two people on the same day. 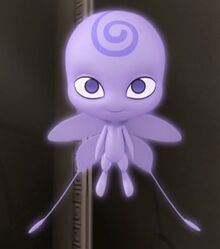