Transylvania within Romania (can teleport)

House Count Dracula and to forever serve as his own domain.

Quarter Count Dracula's armies,
Bridge Earth with Hell and the Dark Realm and the Chaotic Realm together.

Sealed in an Eclipse

The Castlevania, also known as the Demon Castle, the Vampire Castle, or simply Dracula's Castle, is a foreboding gothic castle that is the residence of the infamous King of Vampires Count Vlad Tepes Dracula, and the location where most of the action of the eponymous Castlevania videogame franchise takes place. It serves as Dracula's lair, as well as the headquarters of his demonic legions.

The Castlevania has been described by Dracula's son Alucard as a 'creature of Chaos'. It has also been described as the symbol of Dracula's power. It is connected to its owner, collapsing whenever he falls and rising whenever he resurrects; sometimes even before his return, when summoned by his followers working to bring him back. Whether it was made from the ruins of Walter Bernhard's own haunted castle, which had many similar aspects, or it is a completely different castle was never fully explained.

The Castlevania is in some ways the source of Dracula’s army and his Dark Power. More specifically, it houses an access to Hell, from which Dracula can call forth demons of all sorts; the netherworld housing evil souls, including that of Dracula, and corrupting dark powers; and the Chaotic Realm, where negative energy and human malice gather to fuel Dracula’s Evil and which only the King of the Night (or his successor) can visit. It is also implied that the Castle’s candles hold captive the thousands of souls in Dracula’s grasp.

The Castle is always changing, always appearing under a different aspect, with varying configuration and unique locations within its walls. It is built as a maze to confuse intruders; often with Teleporters that link several locations. It is also filled with various traps such as guillotines, spikes, falling chandeliers, collapsing platforms, lava streams, and pools of acid, among others. Some of its areas do not even obey to the laws of physics, being filled with voids and illusionary spaces or being made from crystal, among other things.

It is stated in many games that the Castle's evil attracts monsters from all over the world, hence the presence of enemies and bosses from many ancient and modern folklores within its walls. (Not to mention the monsters from movies and others.) The Castle also features many anachronisms, like motorcycles and machines gun long before they were invented, and even science-fiction devices like lasers and robots. This could either be explained by the Science Lab/Tower of Science that is often includes... or more simply by the Castle's very nature.

Due to its demonic nature, the Castle has tremendous Dark Powers and sentience of its own. When Dracula is not around, the Castle calls for its lord. It senses people within its walls and reacts to intrusions by sending monsters. It can appear anywhere or even change its location, sense people's connections to Dracula or teleport people inside.

It could even be guessed that all the traps appear as its way to react whenever it is invaded. One more than one occasion, statues and wall ornaments launched fireballs or energy blasts at intruders, or stone dogs came to life to track them down, as if the Castle itself was attacking them.

Dark power pours from the Castle without end, spawning monsters within its walls and infecting the land, the people and the local creatures. Its evil influence alone threatens the life of the normal people trapped inside, as seen in Aria of Sorrow. It is also more than enough to corrupt people (be them alive or dead) or turn them into monsters. It was the Castle's power which turned Rosa into a vampire in Castlevania 64, and likely Annette as well in the bad ending of Castlevania: the Dracula X Chronicles.

The Castlevania itself is found in the Transylvanian province of Wallachia, but it has no defined location and can appear anywhere. It is most often seen atop a mountain nearby a lake, on which floats Dracula's ghost ship, but sometimes appeared in the middle of said lake, among other places. It is constantly surrounded by mist, out of which it seems to come, and it is almost always a full-moon night around it, to strengthen vampires and keep werewolves under their curse.

Despite the Castle's ever-changing nature, it is almost always organized with an Entrance, Underground Locations, a Clock Tower and the Castle Keep. The nearby lake and forest are technically not part of the Castle in itself, yet they are infected by the Castle's magic and swarmed by Dracula's hordes. The castle can also create lairs devised specifically for Dracula's closest followers to inhabit, like the Tower of Death and Olrox's Quarters. Its most recurring features include:

The Dungeons: With jails and torture chambers.

The Condemned Tower: similar to the Ruins...

The Castle was sometimes separated in two distinct castles, like in Symphony of the Night, in which the Dark Priest Shaft created an Inversed Castle in the sky, right over the regular one, as its base of operation. Also in Harmony of Dissonance, when the Castle was split in two after Dracula had returned in spirit but not in the flesh.

Some people tried to take over the Castle for their own gain. In Portraits of Ruins, the Vampire Lord Brauner harnessed the Castle’s Dark Powers into his bewitched paintings to prevent Dracula’s resurrection and claimed the Castle as his own; only to be defeated by the game’s protagonists and finished off by Death.

This happened as well in Aria of Sorrow, set in 2035. Dracula had been destroyed for good in 1999 and the Castle had been sealed in a solar eclipse. Yet, the mad prophet Graham Jonesbelieving to be Dracula reincarnated, tried to succeed him. He entered the Castle during a solar eclipse and managed to reach the Throne Room, absorbing most of the Castle's Dark Powers. However, the Castle was looking for a new master on its own, and dragged Soma Cruz, Dracula's true reincarnation, within its walls. When Soma killed Graham, the Castle transferred all the stolen power to Soma, who had to enter the Chaotic Realm and defeat Chaos itself to avoid becoming Dracula's successor.

The Castlevania is of course featured in the Netflix adaptation of the series. In the beginning of the story, A young woman called Lisa Fahrenheit enters the Castlevania, surrounded with thousands of impaled skeletons. She asks Dracula, who is not yet fully evil, to teach her science, as a last resort to become a medic.

Impressed by her resolve, Dracula accepts and guides her around. He shows her his library, laboratories and astrolabes, and reveals that the Castle is full of advanced technology, which he replicated after scrying into the future, including lightbulbs and machineries. He also explains that he can make it teleport wherever he wants. This provides an explanation for the Castle’s anachronisms and ever-changing location in the games.

After Lisa is burnt as a Stake by a fanatical Bishop, Dracula makes the Castlevania appear in the city of Targoviste and summons an army of demons summoned from Hell itself to slaughter all humans. As in the games, the Castlevania serves as headquarters for Dracula's council of generals, and he stores gallons of blood for his vampire servants. Dracula teleports the Castle in the cities he targeted for destruction, causing devastation by merely appearing.

Trevor Belmont, Sypha Belnades and Alucard eventually learn a spell to prevent the Castle from teleporting to storm it. Contrary to the games, it does not crumbles when Dracula is destroyed, and Alucard stays there to guard the secrets it contains. 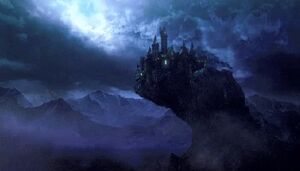 What a horrible night to see a castle 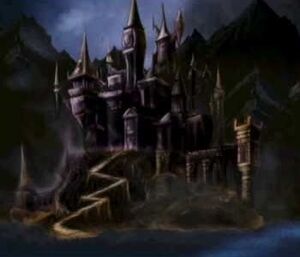 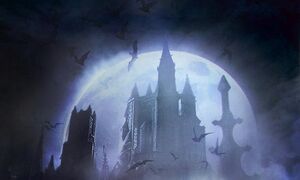 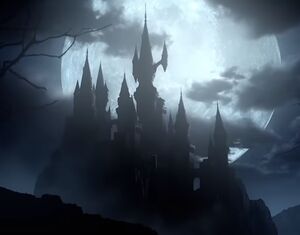 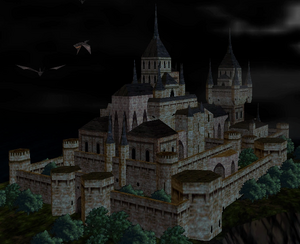 The Castlevania in the Nintendo 64 games
Add a photo to this gallery
Retrieved from "https://evil.fandom.com/wiki/Castlevania?oldid=119135"
Community content is available under CC-BY-SA unless otherwise noted.