The Evil Wiki
Register
Don't have an account?
Sign In
Advertisement
in: Mature, Evil Lairs, Villainous Symbolism,
and 7 more

The Brotherhood of Shadow
Various demons including Oni creatures
Revenants

To forever serve as the Brotherhood of Shadows' "blessed" house of worship and the Netherrealm forces' source of immense preternatural power in the name of their eternal Dark Lord Shinnok (failed).

The Cathedral of Shinnok, true to its alias "Bone Temple", is an underground main church with its walls full of bones and skulls as hallways full of coffins and "angelic" grim reaper statues, while it is connected by its 2 horrid chambers, the "Bone Sepulcher" and the "Catacombs", leading to the main dreaded namesake house of worship itself.

This underground site was consecrated by Lord Shinnok millions of years ago after he is hailed by all the demonic forces of the Netherrealm as the dark realm's supreme master since his banishment from the Heavens for his crimes against both the Elder Gods and all the realms. It one of the 2 places built in Shinnok's name alongside the Pyramid of Shinnok itself.

It serves is the energy core of the Netherrealm Palace that was later built over it.

The head of Shinnok watches the fight in the temple. The arena is located in the Netherrealm, in the castle of Shinnok. An amulet can be used on the right side of the arena to inflict damage on the opponent. 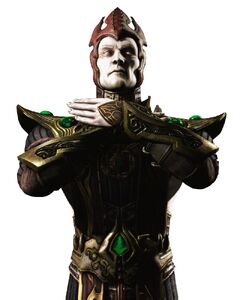 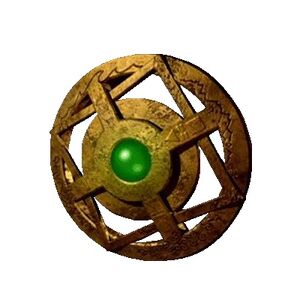 The Amulet of Shinnok

The Temple of Shinnok