The Evil Wiki
Register
Don't have an account?
Sign In
Advertisement
in: Article stubs, Possessed Objects, Magic,
and 7 more

Before Ninja Gaiden II: The Dark Sword of Chaos

To help Ashtar open the Gate of Darkness and rule the Earth with an army of evil.

The Chaosium Sword is a magical weapon wielded by the Dark Emperor of the Chaos Tribe known as Ashtar]and a prominent object featured in the video game Ninja Gaiden II: The Dark Sword of Chaos.

The sword is Ashtar's primary weapon. It was forged from the bone of the Demon, unlike Ryu's Dragon Sword, which was made from the fang of the Dragon. It can absorb the life out of any one it cuts, but it's full power is only activated by the lives of an immortal bloodline. Ashtar can also use it to blast energy. It's the key to opening the Gate of Darkness, but only when it reaches full power. Only the Blade Itself, unsealed can summon the gates to rise, and with it the power of the Dark Realm, to possess the opener. When the Power of the Gate of Darkness is achieved, a new more powerful form is revealed. It needs Immortal Blood to unseal the Evil within.

Ashtar used it on many occasions against his enemies, incapacitating Ryu Hayabusa while mocking him, getting the drop on Robert when he tried to sneak behind him a second time and even impale Irene Lew in front of Ryu's eyes. Confident in the new power the sword had acquired by spilling innocent blood Ashtar dueled Ryu, despite the emperor's immense strength, the ninja was able to defeat him and fatally injure him. Ashtar sended his sword to his inner sanctum before dying.

The sword was eventually recovered by Ashtar's former minion, Jaquio who tried to use it for the same purposes his late master did, to use the blood of the ninja dragon to finally open the gates. Unfortunately after getting heavily injured his own blood was used as the vessel instead, turning his body into a mindless but more powerfull demon, Ryu destroyed this entity closed the gates and the sudden source of power overload the sword and turned it to pieces. 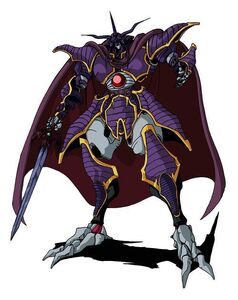