The Evil Wiki
Register
Don't have an account?
Sign In
Advertisement
in: Villainous Tools and Other Items, Magic, Paranormal,
and 3 more

To make Hex all powerful.

To bring Ledgerdomain to the main dimension.

The Charms of Bezel are six magical talismans and an items featured in the animated series Ben 10: Omniverse.

The charms are small stones with different symbols on each of them. Whenever they're activated, they glow.

The charms were crafted by their namesake creator, a former wizard known as Bezel, a very long time ago, during his quest for magical power. Somehow the creation, destruction and recreation of the charms over the years, softened the veil of reality from Ledgerdomain. This allowed the barrier to become weak, enough for other magic-using humans like Hex or Charmcaster to tap into the power of the Ledgerdomain, as well as letting them enter the other realm. 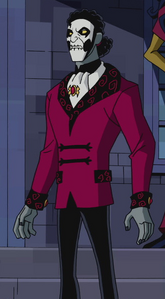