The Evil Wiki
Register
Don't have an account?
Sign In
Advertisement
in: Evil Lairs, Crimes, Oppression,
and 7 more

Bikini Bottom within the Pacific Ocean

To be more sucessful than the Krusty Krab restaurant.

The Chum Bucket is a fast food restaurant located in the city of Bikini Bottom. It is owned by Mr. Sheldon James Plankton, who is better known as Plankton, and his wife Karen Plankton. Plankton is Mr. Eugene H. Krabs and Spongebob Squarepants' arch-nemesis and the area itself is a rival to the Krusty Krab. It is a location in the SpongeBob SquarePants cartoon show.

It is located directly across the street from the Krusty Krab, which is far more successful than the Chum Bucket. It is part of "Sheldon Plankton Enterprises", a division of No Fun Incorporated".

The Chum Bucket's lack of business is not just because of the good food served at the Krusty Krab and the most awful disgusting food at the Chum Bucket.

The restaurant looks like a bucket with a blue hand (could be a glove) holding on to the handle of it. Double doors are placed at the front of the structure. The design of the doors are similar to the way doors in hospitals and intelligence buildings are designed. It also has a drive-thru as seen in the episode "Komputer Overload".

The Chum Bucket features a cafeteria, where food is ordered and eaten. A door in the cafeteria leads to the 'Lab Room', in which Plankton has his Labrador on a computer screen, though this room may no longer exist as it has not appeared since the episode "Plankton!" From here, the doors lead to the kitchen and Plankton's laboratory/living quarters. The laboratory is where Plankton does his evil experiments and builds his inventions.

In "Battle for Bikini Bottom", it is suggested that the Chum Bucket may have a much larger laboratory than what is on the surface. Plankton also has an office, where he sleeps and writes his Evil Plans list to steal the Krabby Patty formula from Mr. Krabs. As revealed in the later episode "Evil Spatula," Plankton has a room filled with spatulas.

Plankton opened the Chum Bucket the same day Mr. Krabs opened the Krusty Krab. It is not known why he opened his restaurant following these significant events, however, judging by his evil ways, it is presumed that Plankton wanted to rule the world and wanted to do this by stealing and selling the Krabby Patties, therefore bringing lots of people into the restaurant and ultimately ruling the world (as depicted in The SpongeBob SquarePants Movie).

It's also possible that he was jealous of Mr. Krabs and wanted to compete against him "Friend or Foe?".

Another theory was that Mr. Krabs and Plankton were once college roommates and that Krabs squished Plankton constantly but accidentally (according to a 2-page comic strip titled "Plankton: The College Years" printed in "Nickelodeon Magazine Presents the SpongeBob SquarePants Movie").

It is estimated that Plankton thought that his future enemy was trying to kill him, and due to Krabs' avarice and advantages over Plankton (particularly when he discovered the Krabby Patty secret formula and decided to sell it), Plankton's jealousy of Krabs only grew stronger. When the Krusty Krab first came into being, the Chum Bucket was somehow built and opened by Plankton, so that he could start stealing the secret formula (which Krabs refused to give away) and soon start an ever-lasting rivalry between the 2 restaurants.

This may be the reason why he hates his arch-rival so much and why he constantly reminds him that "he went to college." It is unknown where Plankton had lived before his restaurant first opened.

A more plausible explanation of the simultaneous opening of both the Krusty Krab and the Chum Bucket was revealed in the episode "Friend or Foe?" where it is explained that, as school pals Krabs and Plankton were picked on by the "cool kids". Their only refuge is behind the popular local burger joint.

They must sit in back so the cool kids still want to eat there. After being shutdown Krabs and Plankton buy the empty space. Then both Krabs and Plankton tell their own versions of why they parted ways until Plankton's computer wife tells the real story. The burgers they were making were lousy and each blamed the other. They begin to fight over the recipe they have and who can improve it. The recipe rips in half sending Krabs flying into the shelf full of spices, which all fall in his patty mix.

Plankton storms out telling Krabs he would show him one day. This is how the secret recipe was born and the reasoning behind the bitter rivalry.

In "The Krabby Kronicle", Health Inspector Yellowtail arrives at the Chum Bucket to officially close it down because of what the Krabby Kronicle says in this front page article: "Plankton's Chum Made of Your Chums!!! The Chum Bucket serves your friends in more ways than one!" Plankton and Karen are forced to watch as Inspector Yellowtail literally places the whole restaurant under lock and chains. It is later revealed that Krabs made this story up to sell his newspaper and Plankton lost the Chum Bucket in the process.

There have been several employees that worked for the Chum Bucket.

The Chum Bucket usually barely has any customers due to Plankton's disgusting food and because the Krusty Krab is much better than his failing restaurant. It is unknown how Plankton keeps his restaurant open, which is also his residence with his computer wife, Karen. There is also no explanation as to how Plankton can fund his evil schemes, since the Chum Bucket is unprofitable.

In the beginning of the episode "Enemy In-Law", a giant Plankton-shaped robot named Chum-Bot kidnaps citizens of Bikini Bottom and deposits them into the Chum Bucket so that Plankton can sell them his food.

In the episode "New Leaf", Plankton says that the only customer was a rat that died when it ate Plankton's food even though rats can't survive underwater since it would be impossible for a land animal (the rat) to survive underwater.

However, The SpongeBob SquarePants Movie was the only time that the Chum Bucket was highly popular. A series of incidents planned and caused by Plankton led to the near-execution of Mr. Krabs by King Neptune. This left Plankton to steal the Krabby Patty secret formula and sell Krabby Patties, therefore filling the void left by the Krusty Krab. Plankton even sold bucket helmets, only to turn the wearers into his robot slaves as soon as Squidward Tentacles threatened to expose his evil plans. It is not known what happened to his restaurant after he was arrested.

Plankton also lured customers in by hypnotizing Mermaid Man and Barnacle Boy and making them say they prefer the Chum Bucket in front of the Krusty Krab clientèle in "Mermaid Man vs. SpongeBob." In this episode, Plankton claims this is the first time he's had to serve food in the Chum Bucket to customers.

In the episode, "Plankton's Regular", it seemed as if Plankton had a "regular" customer (Nat Peterson) who actually liked his Chum on a Stick. However, it was later revealed that Karen paid him to eat the chum, and he stops by giving her back the cash and being carried out of the Chum Bucket to get his stomach pumped.

In the episode "Chum Caverns" Plankton opened an underground restaurant which was also highly popular. The scheme operated on the fact that the customers were so taken by the scenery that they paid no mind to the food.

In the episode "Your Shoe's Untied", a customer shouts that they will eat at the Chum Bucket. Whether they really did or not is unknown.

In the episode "Chum Fricassee", Squidward quits his job at the Krusty Krab and goes to work for Plankton. He then uses his grandmother's recipe to make chum taste good which nearly causes Mr. Krabs to go out of business. Though this could count as karmic punishment due to Krab's poor treatment of his workers.

When Karen suggested advertisement, Plankton had "came up" with the idea and made a sign on his restaurant that read "CHUM IS METABOLIC FUEL". It gained no attention from any customers but customers came once Patrick made a change to Chum is Fum. When the success started with a batch of customers, Plankton hired Patrick to create slogans and was Plankton's entire "marketing department". Later on, the second slogan was so successful that the billboards began to advertise the Chum Bucket. One day customers got tired of saying 'Chum is Fum'. Plankton tells Patrick the Chum Bucket needs a new slogan. After 3 days, Patrick thinks of the slogan 'Fum is Chum' which customers also liked. Then, Patrick resigned and an angered Plankton started revealing his true hatred on his customers which made him lose his customers, thus undoing what his slogans created. Strangely, one billboard with the slogan was present at "SpongeBob's Last Stand".

All of the food served at the Chum Bucket begins with the word "Chum" (with the exception of Raspberry Tea, Bran Muffin, and Prune Danish), where the name of the restaurant comes from. Only after King Neptune accused and froze Mr. Krabs for stealing his crown when it was really Plankton's fault, did he start selling the delicious Krabby Patties here, but only briefly. Plankton has absolutely no talent in cooking whatsoever, with whatever he cooks being foul tasting at best and coming to life at worst (in two episodes however, Plankton succeeds in getting customers, in which eat the chum on their own). Of course, Plankton is completely oblivious to this and considers whatever he makes to be good, such as calling a dish that melted the cooking pot and the floor "delectable". It is revealed in the episode "Spongicus" that Plankton's chum is made out of jellyfish squeezings, whale blubber, seahorse snout, and a sprinkle of anchor rust. Also, under the large version of the menu in the cafeteria is a sign that says, "WARNING." In the episode "Chum Bucket Supreme", it is revealed that the Chum is so foul that even Plankton himself won't eat it (he fakes eating it by making a chewing motion while moving the Chum behind his head, thus, giving the poor illusion it is shrinking as he eats it, and Karen is ridiculed.) In "Free Samples", it is revealed that Patrick Star is the only one who can eat chum compare to anyone else who eats it. And in "Chum Caverns", Patrick ate a lot of Plankton's Chum which means he is the only one who loves eating chum, though he doesn't know his chum is located in the Chum Bucket.

Inventions made in the Chum Bucket 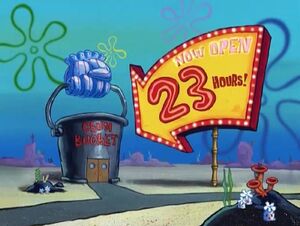 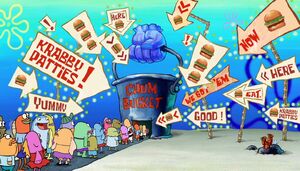 A long line of hungry customers over at the Chum Bucket restaurant. 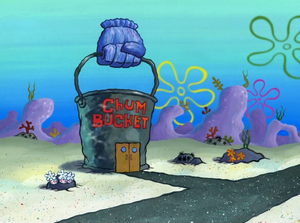 The Chum Bucket at daytime. 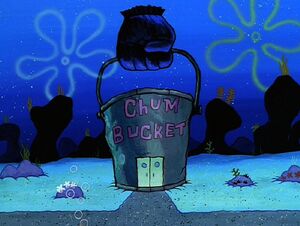 The Chum Bucket at nighttime.