The Citadel Robotnik is a dome-like fortress with a exterior structure modeled after the face of the dictatorial genius Dr. Ivo Robotnik himself, and it was his base of operations and his own residence during the latter half of R.B.R. which is the time of his tyrannical reign over Mobius. Located in the Metropolis Zone, the Citadel was the representation of the Robotnik Empire as well as their main headquarters until Sonic the Hedgehog's final victory in the first war. Dr. Robotnik was given a better view of his people from the Citadel than the Death Egg and the Egg Fortress ever did.

Based in the center of the Metropolis Zone, it served as his lair and the capital of the Robotnik Empire, and allowed him to keep a much closer eye on his people than had been possible from his earlier bases in the Special Zone and Launch Base Zone.

Robotnik maintains an office within the Citadel, with Receptionik acting as his secretary and personal assistant. He also has a laboratory in the basement, which is where he constructed Commander Brutus.

Robotnik originally lived in the Special Zone, ruling Mobius from his Egg Fortress. Needing to be closer to his citizens, he launched a new Death Egg, until that crashed on the Floating Island, making the Launch Base Zone his new home. When his new plan failed, Robotnik moved his operations to the Metropolis Zone, constructing a massive building in his image - Citadel Robotnik. The Citadel was built after the destruction of the second Death Egg and the abandonment of Robotnik's old Egg Fortress.

The first task at Robotnik's new home was to locate the Emerald Hill folk, wishing to make them suffer after what Sonic did to the Death Egg. Within these walls, Robotnik and Grimer would develop Commander Brutus, Mekanik and even a new breed of Metallix. Even secretary robot Receptionik found a home there.

Sonic was first brought to the Citadel by Mr. Blobnik, tasked with rescuing Grimer from the Brotherhood of Metallix. He later returned with Porker Lewis and the Chaotix Crew, just in time to save the world from the Metallix Emperor and his followers. Not long after, Sonic returned with the Freedom Fighters to delete important files from Robotnik's database.

Some time later, Robotnik headed to the Floating Island to deal with the Emerald Hill folk, leaving Grimer in charge. The Freedom Fighters saw this as the perfect opportunity to sabotage the Citadel, but found themselves having to rescue the people from bullying Troopers. With a massive riot underway, Amy Rose and Johnny Lightfoot planned to head to the Citadel to use Robotnik's weapons, but found their way blocked by Vermin the Cybernik.

Following the electromagnetic pulse that knocked out all of Robotnik's computer systems, Robotnik and Grimer returned to the Citadel hoping to use the power generator in the basement to re-boot the machinations of his empire in order to restore his "kingdom". However, this plan was thwarted by Sonic, who spun the generator so fast that it overloaded the power core and the entire Citadel was destroyed in the ensuing explosion, firmly toppling Robotnik as the ruler of Mobius. With their symbol of oppression engulfed in flames, the people of Mobius celebrated V.R. Day.

In the days following Robotnik's defeat and demise, a sinister fanatical cult called D.R.A.T. ("Doctor Robotnik Appreciation Tribe") began meeting in secrecy within the abandoned armory beneath the ruins of the Citadel Robotnik that became their very own "temple". The Citadel is also where Sonic found the schematics for Shortfuse the Cybernik's armor and where Kog was revived. Eventually the remains of the fortress were removed, and the Citadel's moat reformed into the "Crystal Ring", a public swimming pool. When they were discovered by Amy Rose, Johnny Lightfoot and Tekno the Canary, they fled and found a new meeting place.

As part of the New Robotnik Empire as well as potentially their capital, a new Citadel Robotnik appears to have been built near to the coast of the Metropolis Zone. It could be seen when Tails overlooked the city from afar in "Sky Chase". 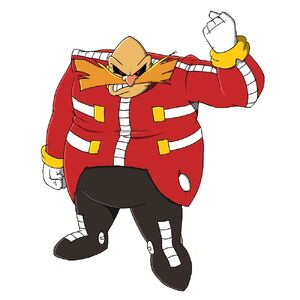 The Master aka Dr. Robotnik.

The official public logo of the D.R.A.T. cult. 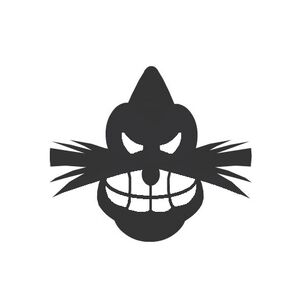 The symbolic emblem of the D.R.A.T. cult. 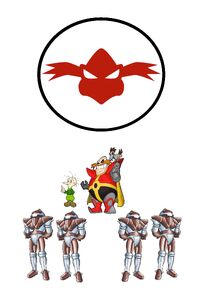 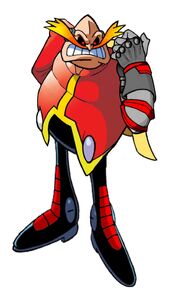 The Master aka Doctor Robotnik 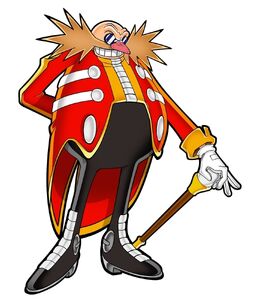 The Master aka Doctor Robotnik.
Add a photo to this gallery
Retrieved from "https://evil.fandom.com/wiki/Citadel_Robotnik?oldid=104732"
Community content is available under CC-BY-SA unless otherwise noted.