The Evil Wiki
Register
Don't have an account?
Sign In
Advertisement
in: Article stubs, Mature, Evil Lairs,
and 8 more

Cthulhu and his fellow Old Ones

The City of R'Lyeh, better known as the "Nightmare City of R'Lyeh", is a twisted otherworldly land which is the home of the colossal beast Cthulhu and it is regarded as a "holy place" by both the Cult of Cthulhu and the Goth Kids. It is a location in the Heroes saga of South Park.

This alternate dimension, due to it's name "Nightmare City of R'Lyeh", is an ancient sunken stone city in a eerie landscape that is filled with all kinds of living terrors and nightmarish abominations as described in the Necronomicon written by the mad Arabic prince Abdul Alhazred. It can be accessed via a portal within the Gulf of Mexico on Earth.

Cartman (as the Coon) banished his friends here when he allied himself with Cthulhu, but Bradley Biggle saved them.

It is most likely that the City of R'Lyeh has something to do with Kenny McCormick and his immortality, since Kenny (as Mysterion) said: "It feels like I've been here before." Notably, Kenny was able to escape from this place by committing suicide, following which he was reborn on Earth. 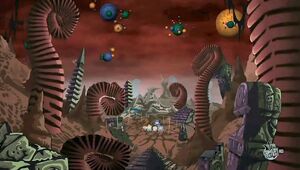 The City of R'Lyeh 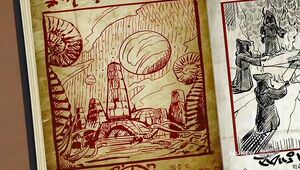 An illustration of the City of R-Lyeh on one of the pages of the Necronomicon. 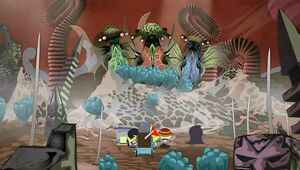