The Clamps are fictional tools of torture utilized by the Akritirians, an antagonistic force in Star Trek: Voyager - they are comparable with devices such as mind-collars and is designed to force prisoners to kill each other in a manner that would be considered torture by most humans.

The clamp was a type of synaptic stimulator implanted by the Akritirians on the brains of their prisoners. It stimulated acetylcholine production in the hypothalamus, causing aggression and irritation. Any attempt to remove it without medical intervention resulted in death.

In 2373, Starfleet Ensign Harry Kim and Lieutenant junior grade Thomas Paris were fitted with clamps upon being falsely sentenced for the bombing of the Laktivia recreational facility and sent to the Akritirian maximum security detention facility. Kim compared the effects of the clamp to being covered with fire ants. The effects of the clamp eventually became debilitating for Paris, though Kim managed to protect him until they were rescued.

One of the prisoners, Zio, believed that the clamp was a method of prisoner population control, by compelling the prisoners to kill each other. Kim agreed with his conclusion after The Doctor examined the devices. 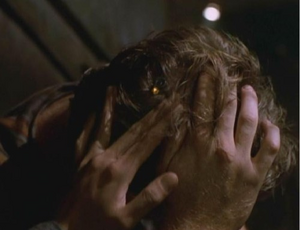 A view of a Clamp.
Add a photo to this gallery
Retrieved from "https://evil.fandom.com/wiki/Clamps?oldid=63789"
Community content is available under CC-BY-SA unless otherwise noted.