To serve as a base of operations for the Trix.

The Cloud Tower, also known as "Cloud Tower School for Witches", is a towering, twisted castle that is a boarding school for Witches and the most prestigious educational institution for Witches. At Cloud Tower, witches learn about witchcraft. It is the magical competitor and rival of Alfea. Its headmistress is Headmistress Griffin. The campus itself is a huge and vast living organism that had been created in ancient times by powerful sorceresses.

Cloud Tower School for Witches is proud to have turned out some of the most evil witches in the universe. With a stellar offering courses in Mayhem, Hexes, and several levels of Advanced Evil, Cloud Tower is the pinnacle of education in the dark arts.

Cloud Tower is hard to enter, as there is a defense field surrounding it. There are ways of getting past this defense, however: tunnels that connect the schools, ways to get past the field itself, and one may enter if one is invited, for example, Valtor transforming into a stag chased by wolves (actually the Trix). Along with that, the tower can be manipulated like a high tech confusion device by the one who is able to control it. This twists the building into forming new corridors or passages to confuse all those inside.

Places mentioned in the tower are the Trix's dorm, the amphitheater, Headmistress Griffin's office, the cafeteria and the Windswept terrace.

Cloud Tower appears as base of operations for Trix, who secretly hold Knut in the school and plot against Winx in order to gain Dragon Flame. After successfully stealing Stellas ring, Winx decided to brake into Cloud Tower in orer to get it back. Mission was succesful, but Ms. Griffin found out that they were there and so she used spells to scare them and informed Faragonda about it. Faragonda punished Winx by removing their powers and made them clean up the Alfea.

After causing trouble with a dream eating monster in Alfea, Trix were expelled from Cloud Tower. However, after taking possession of Dragon Flame, they returned and took over the school and locked everyone (including Riven) in the dungeons. They summoned the Army of Darkness to the school and kept it there in order to attack Magix with them. They took control of the city and Red Fountain as well. Bloom soon came to Cloud Tower with others and Knut (who had betrayed the Trix) in order to search for the Dragon Flame, but Trix set a trap for them. Ms Griffin, Riven and students were let out of the dungeons by Winx and they helped Bloom and others to escape.

After Trix attacked to Alfea and lost to Bloom in battle, Cloud Tower was freed from them and Ms Griffin got her status as headmistress back.

The Tower appears again when the Winx are temporarily transferred there to protect the Codex piece kept there. The Winx, with Mirta as their guide, then have to learn using their dark feelings for the witchcraft hearts, much to their inconvenience, as they are usually taught to use their positive feelings in classes at Alfea.

It is also revealed that Cloud Tower is not only a building, but also a living creature with a heart, the moats being its roots and the towers its branches, and that it was a magical entity created by extremely powerful witches. Meantime, Mirta and Lucy manage to reconciliate.

The Tower is infiltrated by the Trix who, under the orders of Lord Darkar, try to claim the codex of Cloud Tower. Initially, the Trix manage to take control of the Tower, causing it to modify its structure according to their wishes. Later Miss Griffin gains control of the Tower and orders it to come back to its former structure.

After much fighting and wandering in the school, the Winx finally find the location of the Codex and fight the Trix for it but they unable to control the spell they were initially aiming at the Trix and it explodes on themselves, allowing the Trix to steal the Codex fragment.

Cloud Tower appears for a last time in the 25th episode of the season, where Miss Faragonda contacts Miss Griffin to inform her about Lord Darkar who kidnapped Bloom to gain the Ultimate Power.

Miss Griffin accepts to fight together with Faragonda, Codatorta, the Winx and the Specialists against the Ruler of Shadow Haunt. After Darkar's defeat, all the witches of Cloud Tower go to the party organized at Alfea, having apparently put aside their rivalship with the fairies after the Winx girls' temporary transfer there.

When Valtor grew tired of his hideout in Andros, the Trix suggested Cloud Tower as their new hideout, however it was protected by a magical barrier. Valtor transformed into an deer and Trix transformed into wolves in order to trick witches to let Valtor through the barrier. He imprisoned Griffin in the dungeons and took over the students' minds via his magic symbol known as the Mark of Valtor and ordered them to attack Alfea, but fairies managed to repel their attack. Valtor used the Cloud Tower for a long while and travelled to countless worlds to steal their magic.

The Winx however attacked Cloud Tower in order to find Valtor and get revenge for Tecna, who disappeared into the Omega portal. They freed Griffin and Bloom faced Valtor, who however took an upper hand in the fight and lied about Bloom parents having been destroyed by him. Faragonda and Saladin however appeared for aid for the Winx and they managed to repel Valtors powers and leave back to Alfea.

Valtor and the Trix left Cloud Tower eventually, freeing all the witches from under the mind control and moved to a new hideout and Griffin regained her position as headmistress. Valtor however announced an challenge for Faragonda, Griffin and Saladin, making Cloud Tower disappear in the process. Winx later investigated the Cloud Tower's disappearance in order for Bloom to find about fight between Valtor and her parents. It was revealed that Valtor did not destroy or transfer the tower, but had consealed it with his Mark that the Winx broke with their fairy dust.

When Valtor attacked Magix with an elemental spell, he ordered water from Lake Roccaluce to flood the Cloud Tower. After Bloom defeated Valtor along with rest of the Winx, water started to return into lake (the Cloud Tower looking like an enormous fountain as Ms. Griffin herself stated) and Cloud Tower returned back to normal.

As new students arrive to Cloud Tower, an Earth witch, Selina, shows Ms. Griffin the powers of her Legendarium and causes chaos in the Pixie Vilage. As the Trix see this power and want to use it their advantage, they attack, turning Ms. Griffin into a tree and making Cloud Tower fly by extracting it from the mountains. Trix then take over and promises to teach Selina dark magic in exchange for her to use Legendarium for them.

The Trix do not only make the Cloud Tower fly, but they also use it to travel between realms, starting with Linphea and its college.

A view of the Cloud Tower. 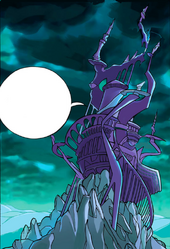 The Cloud Tower in the sky.

The Cloud Tower floating in the air. 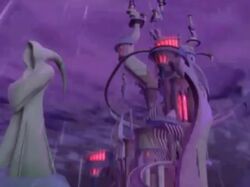 The Cloud Tower School for Witches