The Evil Wiki
Register
Don't have an account?
Sign In
Advertisement
in: Evil Lairs, Villainous Tools and Other Items, Technology,
and 7 more

The Cortex Vortex is a machine bcreated by the evil Dr. Neo Cortex that makes animals and even humans, already subjected to the Evolvo-Ray and transforms them into mindless slaves for the mad scientist. It is featured in both Crash Bandicoot (as a brainwashing contraption in it's first appearance) and Crash Bandicoot 2: Cortex Strikes Back (as the "Cortex Vortex Space Station").

The first Cortex Vortex was built by Dr. Cortex at his Castle on the Cortex Island and it has made any animal obey Cortex and when combined with the Evolvo-Ray, would make mutants for Cortex part of his plan to create his own army. However, it was still at the prototype stage, giving the mutants (Ripper Roo, Koala Kong, and Pinstripe Potoroo) distinct personalities. Despite this, Cortex insisted on using it on his newest mutant, Crash Bandicoot who would "lead my Cortex Commandos into world domination".

However, the machine failed to work on Crash, who escaped the castle. Cortex tried a different approach: subject Tawna Bandicoot to the machine.

However, Crash arrived in time, burned down the Cortex Vortex along with the rest of Cortex's Castle, and saved Tawna.

Immediately after the events of the first game, Cortex discovered a new power source: Crystals. After spending a year building a new Cortex Vortex (which would be big enough to enslave the whole planet), his new sidekick, Dr. N. Gin informs him that he has only found the "Master Crystal". 25 more "Slave Crystals" are needed to power the machine. Fearing his life and realizing that Crash has defeated all of his willing participants, Cortex tricks Crash into gathering the crystals for him, stating that it will help the world.

When Crash delivers the crystals, Coco reveals Cortex's true intentions. Cortex tries to escape with the crystals to the Cortex Vortex, but Crash defeats him and leaves him stranded in deep space. Dr. Nitrus Brio then tells Crash that if he gathers Gems, he can blow up the Cortex Vortex still situated in space. Crash complys and after collecting all of the Gems, Brio uses a laser to destroy the second Cortex Vortex.

The Cortex Vortex Space Station had a very minor, but important role in Crash Bandicoot: Warped. A piece of station plummets down to Earth and collides with an underground temple, freeing an ancient evil known as Uka Uka.

The original Cortex Vortex works by raising the subject into a large chamber with an interior lined with televisions. The televisions will then revolve around the subject while broadcasting signals directly into their brain; brainwashing them into loyal soldiers. However, the success rate of the machine varies due to constant malfunctions.

The second Cortex Vortex is much bigger than the original and needs a larger power source to activate it. The Power Crystals alone are insufficient to energize the machine, but they can be used to contain and harness a massive solar flux that has enough energy to rip the Earth apart. Once it’s power requirements are met, the Cortex Vortex can fire a single blast which will turn everyone on Earth into Dr. Cortex’s mindless slaves. 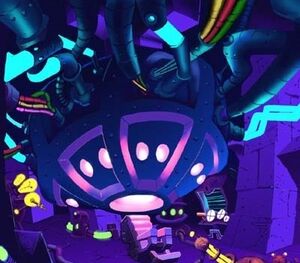 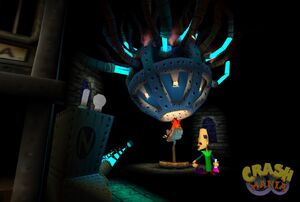 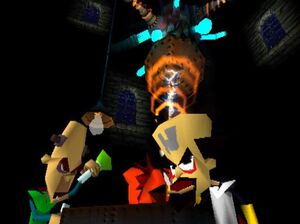 The Cortex Vortex in its original design as a laser gun-like device in Crash Bandicoot. 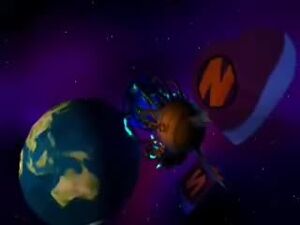 The newly-built Cortex Vortex now as a space station in Crash Bandicoot 2: Cortex Strikes Back. 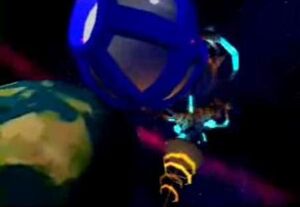 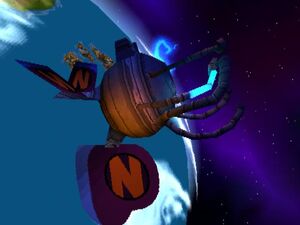 The Cortex Vortex came crashing and plummeting towards Earth in Crash Bandicoot: Warped.