The Evil Wiki
Register
Don't have an account?
Sign In
Advertisement
in: Villainous Tools and Other Items, Technology, Elementals

The Cosmic Control Rod is a weapon that grants its wielder vast amounts of cosmic energy.

The Cosmic Control Rod is a powerful weapon that grants its wielder the ability to manipulate cosmic energy rearranging the object's molecular structure.

The Rod was said to have housed the essence of a Tyannan starship's stardrive, which means that the Rod had incalculable power and abilities, which the wielder could use to augment his or her strength and power.

Annihilus created the Cosmic Rod after donning a knowledge transference helmet and it bestowed the knowledge he needed to master the advanced Tyannan technology for his own cause. 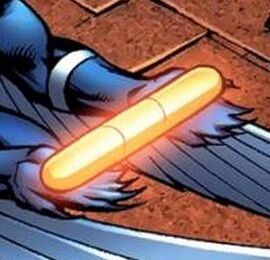 The Cosmic Control Rod glows as it radiates with awesome cosmic energy.

The Cosmic Control Rod as seen in The Avengers: Earth's Mightiest Heroes.
Community content is available under CC-BY-SA unless otherwise noted.
Advertisement