Coutn Dooku's Castle, also known as Count Dooku's Lair, is a caste owned by Count Dooku of Serenno and it serves as both the Sith Lord's home and his base of operations.

His fortress-like citadel was located on the moon of the planet Kohlma during Count Dooku's years as Darth Sidious' Sith apprentice.

The lair, designed with distinctive pointed and thorn-like architecture, was located on top of a mountain spire. The gray interior was lined with grotesque gothic statues of unknown origin, depicting Humans (or near-Humans) holding large swords. The castle also contained at least 2 giant statues of boar-faced humanoids, likewise holding large swords, flanking one of the entrances. Several traps may have existed to deter unwanted guests; among them, a snake-like tentacled beast lurking under the entrance walkway, which even Dooku himself had to fend off in order to enter the lair.

Darth Sidious (also known as Palpatine) once met Dooku there in person only a short time after Supreme Chancellor Palpatine's election. It was here that Dooku tortured Silas to reveal information on Jango Fett, and where he held a meeting with Fett prior to the Mandalorian's recruitment as the Prime clone.

Dooku also met with Bok and Kh'aris Fenn here after his plot to put Fenn in charge of Ryloth failed. 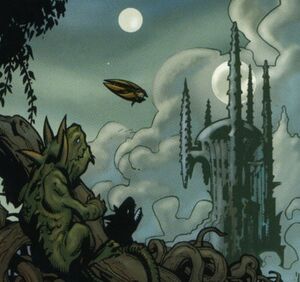 Dooku's Castle
Add a photo to this gallery

Retrieved from "https://evil.fandom.com/wiki/Count_Dooku%27s_Castle?oldid=63939"
Community content is available under CC-BY-SA unless otherwise noted.