The Evil Wiki
Register
Don't have an account?
Sign In
Advertisement
in: Article stubs, Villainous Tools and Other Items, Elementals,
and 3 more

The Crown of Fire is an ancient magical crown engulfed in green, mystical flames and it is one of many items featured in the Danny Phantom series.

It is one of the many old ghostly objects within the Ghost Zone once used by the Ghost King, Pariah Dark. If used when combined with the Ring of Rage, it gives the user infinite power and total dominion over all.

The Crown of Fire is a shiney, dark green crown filled with flowing, brewing green flames made up of pure ghostly energy that acts as its' aura, hence the name "Crown of Fire".

Size changes depending upon the user's head.

Pariah Dark wore this crown upon his head during his first reign in the Ghost Zone. While wearing the crown along with the Ring of Rage, Pariah had infinite powers, being the most powerful ghost. He was defeated and dethroned by a mysterious ancient group of ghosts that soon stripped and took both the 2 relics, and then they locked him inside the Sarcophagus of Forever Sleep, where he would rest for eternity.

Vlad Plasmius used the Skeleton Key he had stolen to get the ring and obtain its awesome power. When he put it on, soon he realized he had to wear the Crown of Fire, which was locked in the sarcophagus, since Pariah was using it when it was locked. Vlad opened the sarcophagus and released Pariah, who easily defeated him and forced him to give him the ring, but Vlad escaped with this.

To avoid persecution, Vlad gives Valerie Gray ring. When the Fright Knight and Pariah Dark were in Amity Park looking for it, Valerie puts it on a rocket that she fires, in an attempt to buy time to save Danny and Vlad. Pariah catches the missile and put the ring on his finger, getting the infinite power with his 2 prized treasures conbined and within his possession.

During the final battle against Danny (who was using the Exo-Skeleton Fenton that increased his powers 100 times but energy consumed) at Pariah's Keep, Pariah fought in a fight fairly evenly matched, but the infinite powers of the king avoided losing. Danny uses what energy he had left to get the Crown of Fire and the Ring of Rage and lock him back in the Sarcophagus of Forever Sleep. 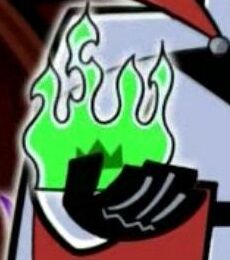 The Crown of Fire
Community content is available under CC-BY-SA unless otherwise noted.
Advertisement