The Cruel Veterinarian's Rocket is the Cruel Veterinarian's very own designed launch vehicle featured in the episode "Remembrance of Courage Past" of the hit cartoon show Courage the Cowardly Dog. The rocket itself is launched from the "Pets of Tomorrow" veterinarian office in the American town of Nowhere within Kansas which the villain created it with his secret knowledge of rocket science and aerospace engineering.

The purple rocket has 4 boosters. 3 on-screen and 1 off-screen, with one sustainer engine. It has a habitation stack (a door with windows). On top of the canine habitation stack are the fuel tanks inside, which contain the fuel and oxidiser. As seen in Courage's flashback, it has 2 umblical arms, 1 for electrical power and 3 for fuel on top. It also has a robotic arm to probably get it ready for launch. This is similar on how the real life Atlas 5 (by the United Launch Alliance (ULA for short) and others like Ariane 4 (by Arianespace) are launched in the same fashion. Similar on how missiles are launched from underground, the silo's cover opens up for the rocket to launch.

In terms of size, the rocket's tanks is the same diameter as Japan's H-IIB rocket's hydogen tanks (56.6 meters combined with the oxygen tank, the H-IIB is used to launch HTV missions to the International Space Station). However, the rocket's small compared to the H-IIB, which is tall.

The sustainer engine however, is the same size of the Delta II's RS-27 engine from Aerojet Rocketdyne.

The hose connects from the top to the habitation stack, to create a pressurized environment.

The control room is basically different, since it is integrated with the hospital.

While successfully learning to catch a ball, he accidentally got his head stuck in between the bars of the fence and he was taken to the Pets of Tomorrow veterinarian office. Here, he was freed by a seemingly kind doctor, who gave him a lollipop and ushered him out of the room so he could "speak" to his parents alone. His tongue got stuck to the surface of the sucker, and then tore off, so the baby dog rushed back to be nurtured by his parents. When he returned, the three were gone and screams pleading for assistance could be heard from the hallway. He abandoned his candy and rushed in to find the veterinarian carrying his parents away in a net. They begged the doctor to not separate them from their son. He rushed after them into a room of caged dogs, and then into another room where he discovered his parents being forced into a rocket ship. He tried to help them before its launch but failed, as his fear drove him to flee into a garbage chute which led to a back alley. From there he watched as his family was sent away into space forever, as the rocket engines ignite and lifted off the ground from the building, while waving a tearful goodbye to them.

Years later, the Cruel Veterinarian tries to do the same to Courage after recognizing him from the past. When Muriel and Eustace attempt to rescue Courage, he decides that he can't allow his operation to be discovered and decides to send Muriel and Eustace into space as well.

However, Courage rescues his owners and locks the vet inside the rocket, which after T-0, the rocket engines underneath then ignites and the rocket launches, sending the vet into space instead. Crash landing on a planet, he finds that all the dogs have survived, including Courage's parents, and his beliefs to turn them into super-dogs have failed.

The Cruel Veterinarian is then petrified, as he is dragged off in a net and attacked by the vengeful dogs off-screen for his actions. He is heard screaming during the attack, concluding the episode.

Cruel Vet's rocket 2.png
The rocket in its building/silo, about to launch. 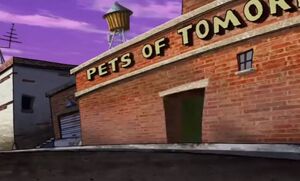 Pets of Tomorrow.
Add a photo to this gallery
Retrieved from "https://evil.fandom.com/wiki/Cruel_Veterinarian%27s_Rocket?oldid=102860"
Community content is available under CC-BY-SA unless otherwise noted.