To help Freakshow in controlling all ghosts.

To aid Freakshow in gaining new brainwashed followers for his Circus Gothica gang.

The Crystal Ball Staff is a powerful magical sceptre used by the evil ringmaster Freakshow to enslave and control ghosts. It is one of many well-known objects featured in the sci-fan superhero cartoon show Danny Cartoon.

Freakshow used a family heirloom of his called the Crystal Ball Staff to control ghosts, and ultimately established his own traveling carnival, Circus Gothica.

Freakshow used these ghosts not only as part of the Circus Gothica to help him becoming rich by committing a series of robberies. This pleases the evil ringmaster who has an intention of not only being incredibly wealthy but also to enslave and control all ghosts in the world.

Freakshow and his ghoulish goons within his circus trope later arrived at the American town of Amity Park where his his own magic staff caught the attention and the mind of Danny Fenton (known by his superhero alter ego Danny Phantom).

Danny Phantom destroyed the Crystal Ball Staff while saving both his 2 best friends Samantha "Sam" Manson and Tucker Foley who were helping him break free of Freakshow's control, and the Circus Gothica was disbanded and the ghosts were set free while Freakshow was left being trapped in a pile of stolen goods and later quickly arrested for his crimes.

The Crystal Ball Staff is a bright red cane-like scepter with a red bat statuette on the top of the staff holding a bright ruby-red crystal ball radiating with concentrated, strong, swirling supernatural energy.

The Crystal Ball Staff works like a hypnotic spell and it is extremely powerful, capable of placing anyone or anything from a mere glance into a trance-like state as slaves. Even just looking at it is enough to put ghosts under it's control. 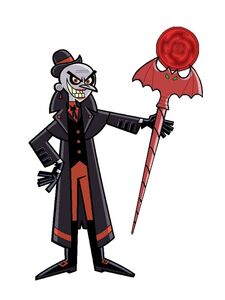 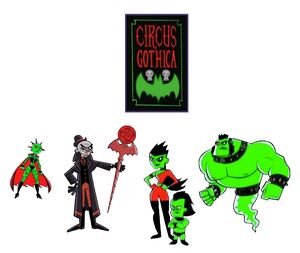 Freakshow introducing himself and utilizing the magic of his Crystal Ball Staff.

Presenting Freakshow and the Circus Gothica.

Circus Gothica; come and get your freak on, with real freaks.

"Cross over to the Dark Side!"
Add a photo to this gallery

Retrieved from "https://evil.fandom.com/wiki/Crystal_Ball_Staff?oldid=119927"
Community content is available under CC-BY-SA unless otherwise noted.